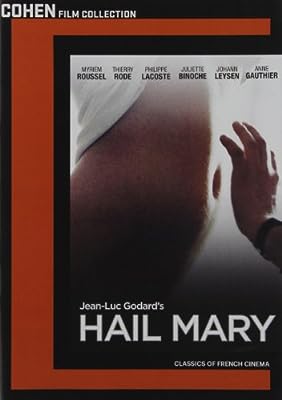 Price: $30.99
As of 2023-02-07 04:38:36 UTC (more info)
Product prices and availability are accurate as of 2023-02-07 04:38:36 UTC and are subject to change. Any price and availability information displayed on http://www.amazon.com/ at the time of purchase will apply to the purchase of this product.
Availability: Not Available - stock arriving soon
Buy Now from Amazon
Product Information (more info)
CERTAIN CONTENT THAT APPEARS ON THIS SITE COMES FROM AMAZON SERVICES LLC. THIS CONTENT IS PROVIDED 'AS IS' AND IS SUBJECT TO CHANGE OR REMOVAL AT ANY TIME.

One of the most controversial films of all time by one of the world s most provocative directors. Hail Mary is Jean-Luc Godard s retelling of the story of the virgin birth, transposed to modern day and filled with the mundane aspects of any teenage girl s life. Punctuated by beautiful cinematography and a lush score, it is a surprisingly heartfelt and reverential film by a master filmmaker.
The short; The Book of Mary was originally released with the feature as a companion piece. Directed by long-time Godard collaborator Anne-Marie Miéville, it tells the story of the break-up of a marriage as seen through the eyes of the couples young daughter.
Bonus Features: Three featurettes previously not available in the US Short film; The Book of Mary. Notes on Hail Mary, Jean-Luc Godard s video notebook.
Feature-length audio commentary by director Hal Hartley and Museum of the Moving Image Chief Curator David Schwartz Booklet essay by film critic David Sterritt and Boston University Lecturer Charles Warren Trailers.