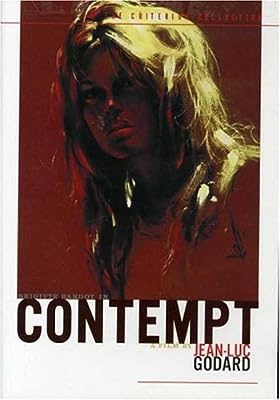 Price: $39.95
As of 2022-10-07 19:30:32 UTC (more info)
Product prices and availability are accurate as of 2022-10-07 19:30:32 UTC and are subject to change. Any price and availability information displayed on http://www.amazon.com/ at the time of purchase will apply to the purchase of this product.
Availability: Not Available - stock arriving soon
Buy Now from Amazon
Product Information (more info)
CERTAIN CONTENT THAT APPEARS ON THIS SITE COMES FROM AMAZON SERVICES LLC. THIS CONTENT IS PROVIDED 'AS IS' AND IS SUBJECT TO CHANGE OR REMOVAL AT ANY TIME.

Jean-Luc Godard's poetic masterpiece Contempt is a like a haunting three-act Greek tragedy, in which a French playwright gets hired by a seedy and corrupt American film producer to rewrite a movie script of a direct to film adaptation of The Odyssey, which is being directed by the legendary German director Fritz Lang (playing himself). Through a series of misunderstandings between husband and wife, Camille believes her husband is selling out his writing talents, all the while allowing the all powerful and predatory producer to flirt with her. Godard brilliantly presents the slow deterioration of a marriage while having the events in the story exist as a string of metaphors, connecting the poetic historical layers of art imitating life.

Jean-Luc Godard's subversive foray into commercial filmmaking is a star-studded Cinemascope epic. Contempt (Le M pris) stars Michel Piccoli as a screenwriter torn between the demands of a proud European director (played by legendary director Fritz Lang), a crude and arrogant American producer (Jack Palance), and his disillusioned wife, Camille (Brigitte Bardot) as he attempts to doctor the script for a new film version of The Odyssey.

With his aptly titled Contempt, Jean-Luc Godard embraced the widescreen splendor of Hollywood while thumbing his nose at Hollywood itself. A rebel with a cause, Godard pursues an iconoclast's agenda, using the Franscope format (expertly controlled by cinematographer Raoul Coutard) to undermine the grandeur of widescreen melodramas. The story ostensibly concerns an innovative production of Homer's Odyssey and the struggle of a respected screenwriter (Michel Piccoli) to please a pugnacious producer (Jack Palance), a veteran director (Fritz Lang, essentially playing himself), and a petulant wife (Brigitte Bardot) who's grown tired of their turbulent relationship. It's all pretense, however, for Godard's mischievous (and yes, contemptuous) deconstruction of commercial Hollywood filmmaking, potently infused with film-buff in-jokes, astute observations about love, stardom, and artistry, and enough glossy style to suggest that Godard had mastered the craft he so willfully rejects. Contempt is one of his most accessibly fascinating films. --Jeff Shannon

Contempt at the time can be looked at as Godard’s love letter to his present wife Anna Karina, as it was believed the two did not get of them along during the shooting of the film. There is even one point in Contempt where Godard seems to dress Bardot to resemble her, as Bardot dons a black wig which closely resembles the iconic hair-style of Anna Karina. Raoul Coutard's gorgeous cinematography and lush primary colors add to the films poetic grandeur, but its the masterful soundtrack by George Delerue that really sets the tone for the entire film. The score gives Contempt its full haunting effect as it has a tragic and sad underlining to the music that really represents the tragic relationship that is slowly unfolding. Contempt is one of the greatest meditations on self-criticism and of the creative process of movie-making in which the gods of male artists analyze their self vanities and sexism while the women in their lives are destroyed in the process.