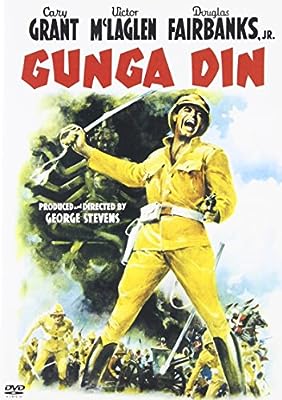 Price: $19.97
As of 2021-12-03 13:05:20 UTC (more info)
Product prices and availability are accurate as of 2021-12-03 13:05:20 UTC and are subject to change. Any price and availability information displayed on http://www.amazon.com/ at the time of purchase will apply to the purchase of this product.
Availability: Not Available - stock arriving soon
Buy Now from Amazon
Product Information (more info)
CERTAIN CONTENT THAT APPEARS ON THIS SITE COMES FROM AMAZON SERVICES LLC. THIS CONTENT IS PROVIDED 'AS IS' AND IS SUBJECT TO CHANGE OR REMOVAL AT ANY TIME.

Cary Grant, Douglas Fairbanks, Jr. and Academy Award winner Victor McLaglen star in Rudyard Kipling's classic tale of the noble Indian Gunga Din. British Colonial India. Three regimental sergeants of the Raj (Grant, McLaglen and Fairbanks, Jr.), accompanied by their native-born water carrier, Gunga Din (Sam Jaffe), are assigned to protect a remote village from a gang of murderous religious fanatics. The small band finds adventure along the frontier of the subcontinent, but finally, overwhelmed in battle and facing certain death, the British soldiers are saved by the selfless heroism of the valiant Gunga Din.

This big, boisterous adventure is more inspired by than based on Rudyard Kipling's famous poem. Legendary screenwriters Ben Hecht and Charles MacArthur have fashioned a rousing Hollywood movie full of high adventure, knockabout comedy, and old-fashioned male bonding. And old-fashioned it is: the trio of British officers and best friends who form the core of the film are a 19th-century three musketeers in India, threatened by the interventions of a woman who means to marry the dashing Ballantine (Douglas Fairbanks Jr.). Blustery commander MacChesney (Victor McLaglen) schemes to keep Ballantine in the army while his second in command, the treasure-hunting Cutter (Cary Grant in a hopelessly mugging comic performance), continues searching for his elusive mother lode, but all their plans are thrown into chaos when the rise of the bloodthirsty Thugs threaten Britannia's soldiers. Sam Jaffe takes up the rear guard in turban, loin, and full-body make-up as the titular Gunga Din, the loyal water carrier who dreams of becoming a soldier. Bombastically chauvinist and naively imperialist, the film is bound to rub some people wrong, but Stevens creates a thrilling spectacle in the grand Hollywood mold, a handsome, exciting classic comic adventure that helped make 1939 Hollywood's grandest year. --Sean Axmaker