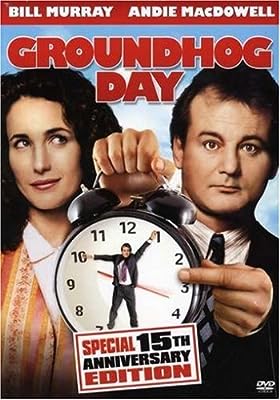 Price: $9.99
As of 2022-08-11 23:43:22 UTC (more info)
Product prices and availability are accurate as of 2022-08-11 23:43:22 UTC and are subject to change. Any price and availability information displayed on http://www.amazon.com/ at the time of purchase will apply to the purchase of this product.
Availability: Not Available - stock arriving soon
Buy Now from Amazon
Product Information (more info)
CERTAIN CONTENT THAT APPEARS ON THIS SITE COMES FROM AMAZON SERVICES LLC. THIS CONTENT IS PROVIDED 'AS IS' AND IS SUBJECT TO CHANGE OR REMOVAL AT ANY TIME.

Bill Murray is at his wry, wisecracking best in this riotous romantic comedy about a weatherman caught in a personal time warp on the worst day of his life. Teamed with a relentlessly cheerful producer (Andie MacDowell) and a smart-aleck cameraman (Chris Elliott), TV weatherman Phil Connors (Bill Murray) is sent to Punxsutawney, Pennsylvania, to cover the annual Groundhog Day festivities. After a surprise blizzard traps him in small-town hell, things get even worse; Phil wakes the next morning to find it’s GROUNDHOG DAY all over again… and again… and again.

Bill Murray does warmth in his most consistently effective post-Stripes comedy, a romantic fantasy about a wacky weatherman forced to relive one strange day over and over again, until he gets it right. Snowed in during a road-trip expedition to watch the famous groundhog encounter his shadow, Murray falls into a time warp that is never explained but pays off so richly that it doesn't need to be. The elaborate loop-the-loop plot structure cooked up by screenwriter Danny Rubin is crystal-clear every step of the way, but it's Murray's world-class reactive timing that makes the jokes explode, and we end up looking forward to each new variation. He squeezes all the available juice out of every scene. Without forcing the issue, he makes us understand why this fly-away personality responds so intensely to the radiant sanity of the TV producer played by Andie MacDowell. The blissfully clueless Chris Elliott (Cabin Boy) is Murray's nudnik cameraman. --David Chute