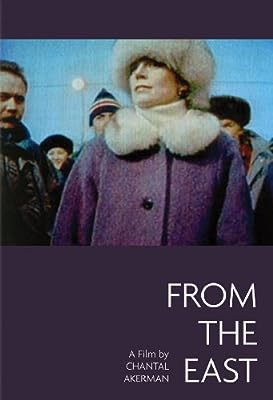 Price: $23.53
As of 2022-12-06 08:56:28 UTC (more info)
Product prices and availability are accurate as of 2022-12-06 08:56:28 UTC and are subject to change. Any price and availability information displayed on http://www.amazon.com/ at the time of purchase will apply to the purchase of this product.
Availability: Not Available - stock arriving soon
Buy Now from Amazon
Product Information (more info)
CERTAIN CONTENT THAT APPEARS ON THIS SITE COMES FROM AMAZON SERVICES LLC. THIS CONTENT IS PROVIDED 'AS IS' AND IS SUBJECT TO CHANGE OR REMOVAL AT ANY TIME.

FROM THE EAST (D Est) retraces a travel from the end of summer to deepest winter, from East Germany, across Poland and the Baltics, to Moscow. It is a voyage Chantal Akerman wanted to make shortly after the collapse of the Soviet bloc "before it was too late" reconstructing her impressions in the manner of a documentary on the border of fiction.

By filming "everything that touched me" Akerman sifts through and fixes upon sounds and images as she follows the thread of this subjective crossing. Without dialogue or commentary, but with a soundtrack rich in the tones, noises and voices of these lands, FROM THE EAST is a cinematographic elegy.

Bonus! A booklet with Chantal Akerman's essay On D'Est.

Foolish Wives / The Man You Loved to Hat...