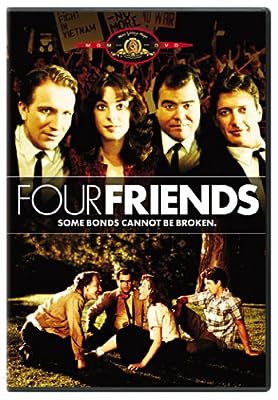 Price: $9.95
As of 2023-02-06 03:04:58 UTC (more info)
Product prices and availability are accurate as of 2023-02-06 03:04:58 UTC and are subject to change. Any price and availability information displayed on http://www.amazon.com/ at the time of purchase will apply to the purchase of this product.
Availability: Not Available - stock arriving soon
Buy Now from Amazon
Product Information (more info)
CERTAIN CONTENT THAT APPEARS ON THIS SITE COMES FROM AMAZON SERVICES LLC. THIS CONTENT IS PROVIDED 'AS IS' AND IS SUBJECT TO CHANGE OR REMOVAL AT ANY TIME.

Academy Award®-winning* screenwriter Steven Tesich (Breaking Away) and Oscar®-nominated** director Arthur Penn (Bonnie and Clyde, Alice's Restaurant) team up for this "charming, powerful" (Leonard Maltin) coming-of-age story set against the protest, prosperity and broken promises of the '60s. Coming to America with big dreams, young Danilo stands before a future of endless possibilities until he falls in love with Georgia. A free-spirited flower child, Georgia loves everyone including Danilo's two best friends! But their friendships are strained when she becomes pregnant by one and marries another. Hurt and despondent, Danilo begins an angry search for someone to fill the void until their fateful paths cross once again for a last explosive encounter.*1979: Original Screenplay, Breaking Away**1969: Alice's Restaurant; 1967: Bonnie and Clyde; 1962: The Miracle Worker

Four Horsemen of the Apocalypse (1962)