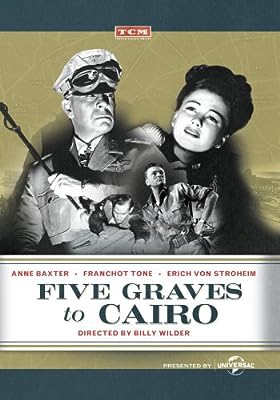 Price: $19.98
As of 2023-02-01 13:34:58 UTC (more info)
Product prices and availability are accurate as of 2023-02-01 13:34:58 UTC and are subject to change. Any price and availability information displayed on http://www.amazon.com/ at the time of purchase will apply to the purchase of this product.
Availability: Not Available - stock arriving soon
Buy Now from Amazon
Product Information (more info)
CERTAIN CONTENT THAT APPEARS ON THIS SITE COMES FROM AMAZON SERVICES LLC. THIS CONTENT IS PROVIDED 'AS IS' AND IS SUBJECT TO CHANGE OR REMOVAL AT ANY TIME.

The wartime espionage thriller FIVE GRAVES TO CAIRO, starring Franchot Tone and Anne Baxter, marks Billy Wilder's second directorial effort. John J. Bramble Tone), the sole survivor of a British tank crew, makes his way to a desolate desert town where he is given refuge by a hotel owner (Akim Tamiroff) and a French hambermaid (Baxter) who prepare to receive General Erwin Rommel (Erich Von Stroheim) and his German staff. Posing as the hotel's waiter, Bramble attempts o infiltrate Rommel's inner circle and report the general's plans to the Allies.