The Billy Wilder DVD Collection (The Apartment / Avanti! / The Fortune Cookie / Irma la Douce / Kiss Me Stupid / One Two Three / The Private Life of Sherlock Holmes / Some Like It Hot / Witness for the Prosecution) 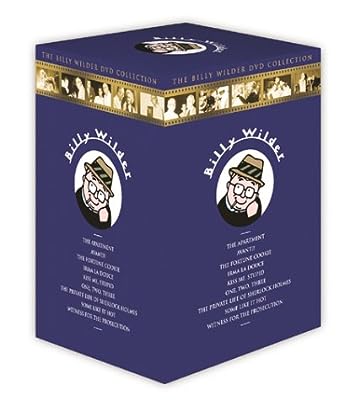 Price: $49.90
Availability: Not Available - stock arriving soon
Buy Now from Amazon
Product Information (more info)
CERTAIN CONTENT THAT APPEARS ON THIS SITE COMES FROM AMAZON SERVICES LLC. THIS CONTENT IS PROVIDED 'AS IS' AND IS SUBJECT TO CHANGE OR REMOVAL AT ANY TIME.

The Billy Wilder DVD Collection includes the following films: The Apartment, Avanti!, The Fortune Cookie, Irma la Douce, Kiss Me Stupid, One Two Three, The Private Life of Sherlock Holmes, Some Like It Hot, and Witness for the Prosecution.

Even if "nobody's perfect," Billy Wilder sometimes came close. This DVD box presents a strong cross-section of films by one of Hollywood's greatest directors, and although his early Paramount years are not covered (they're available in a different set), the box does include a couple of Wilder's woefully underappreciated autumnal gems. Chronologically speaking, 1957's Witness for the Prosecution is the earliest film in the set, a crackerjack courtroom drama derived from Agatha Christie. It gives especially tasty roles to Charles Laughton and Marlene Dietrich. With Some Like It Hot, Wilder merely created the film widely considered the best comedy of the sound era, with Tony Curtis and Jack Lemmon impersonating female musicians in the Roaring Twenties. Marilyn Monroe is the songbird tired of getting the fuzzy end of the lollipop. Wilder took home three Oscars® for The Apartment, his exquisitely bittersweet look at an organization man (Lemmon) who loans out his flat for his boss's liaisons.

One, Two, Three is a breathless Cold War comedy (and a time capsule of its era) with James Cagney as a Coca-Cola executive in Berlin. Irma La Douce teams Lemmon and Shirley MacLaine in a racy Parisian love story that became a box-office smash. With Kiss Me, Stupid, Wilder suffered a rare flop, although the once-scandalous sex comedy looks better and sharper as it ages. The Fortune Cookie, which nabbed an Oscar for Walter Matthau, is one of Wilder's most cynical tales, but the last two films in the set represent Wilder's late-career romantic flowering. The Private Life of Sherlock Holmes arranges slapstick around the melancholy, misogynistic figure of Holmes, who might just be a directorial self-portrait. Avanti! is a delightful, leisurely romance about a businessman (Lemmon again) who loosens up while in Italy settling his late father's business. It's a lovely end note for a snappy, often acerbic collection. --Robert Horton