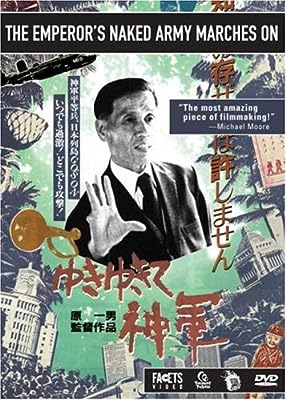 Price: $22.89
As of 2022-08-11 03:04:05 UTC (more info)
Product prices and availability are accurate as of 2022-08-11 03:04:05 UTC and are subject to change. Any price and availability information displayed on http://www.amazon.com/ at the time of purchase will apply to the purchase of this product.
Availability: Not Available - stock arriving soon
Buy Now from Amazon
Product Information (more info)
CERTAIN CONTENT THAT APPEARS ON THIS SITE COMES FROM AMAZON SERVICES LLC. THIS CONTENT IS PROVIDED 'AS IS' AND IS SUBJECT TO CHANGE OR REMOVAL AT ANY TIME.

This absorbing documentary follows Kenzo Okuzaki--a veteran of Japan's WWII campaign in New Guinea--as he searches out those responsible for the mysterious deaths of several soldiers in his unit. Though he holds Emperor Hirahito accountable for all the suffering caused by WWII, he painstakingly tracks down former military officers and accuses them of specific war crimes, often times abusing them verbally and physically. Director Kazua Hara's subtle cinema verite not only captures the zeal of Okuzaki's lifelong mission, but also exposes the atrocities committed by the Japanese military against its own soldiers. The film created such controversy in Japan upon release that no major distributor would touch it.

Whatever you call it--a righteous and cathartic quest for the truth and the odyssey of a vengeful madman are two possibilities--the saga depicted in The Emperor's Naked Army Marches On is both compellingly strange and strangely compelling. A good five years in the making (it was released in 1987), director-cinematographer Kazua Hara's documentary concerns itself with one Kenzo Okuzaki, a 62-year-old World War II veteran and an anti-establishment character of a kind little known in Japan. Having already served almost fourteen years in prison for various offenses (including killing a real estate broker and shooting a sling at Emperor Hirohito), the unrepentant Okuzaki spends much of the film trying to root out the perpetrators of an atrocity that occurred during his deployment in New Guinea, when two soldiers were executed for desertion--after the war had ended. Sometimes accompanied by the two men's surviving relatives, Okuzaki simply shows up at the alleged perps' homes; in typical Japanese fashion, he apologizes profusely for arriving unannounced (even though that's obviously one of his primary tactics) before challenging them, relentlessly and abrasively ("You can't escape God's judgment!" he shouts at one. "I'm a much better human being than you!" he tells another). For the most part, the accused pass the buck to their commanding officer (who himself claims that he was only following orders). And while some of these confrontations are reasonably civil, others find the outraged Okuzaki physically attacking his prey, culminating in yet another prison sentence. This is genuine cinema verite, presented utterly without artifice; there's no music, the look of the film is plain and washed out, and the lighting is often terrible. Yet the fact that a character like this exists at all in Japan, a country where "the nail that sticks up shall be hammered down," is quite remarkable. Kenzo Okuzaki refused to be hammered--and he's got the scars to prove it. --Sam Graham