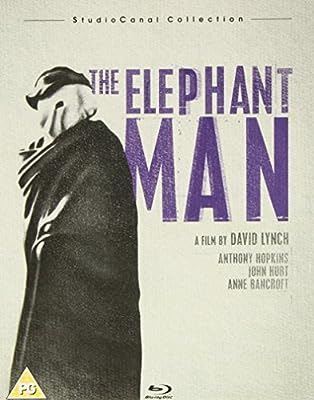 Price:
As of 2022-10-07 18:52:00 UTC (more info)
Product prices and availability are accurate as of 2022-10-07 18:52:00 UTC and are subject to change. Any price and availability information displayed on http://www.amazon.com/ at the time of purchase will apply to the purchase of this product.
Availability: Not Available - stock arriving soon
Buy Now from Amazon
Product Information (more info)
CERTAIN CONTENT THAT APPEARS ON THIS SITE COMES FROM AMAZON SERVICES LLC. THIS CONTENT IS PROVIDED 'AS IS' AND IS SUBJECT TO CHANGE OR REMOVAL AT ANY TIME.

Import Blu-Ray/Region A+B pressing. Packaged in hardbook style case. David Lynch, creator of Twin Peaks and acclaimed director of Eraserhead, Blue Velvet and Wild At Heart, directs this bizarre but true story of courage and human dignity. John Hurt gives the performance of a lifetime as John Merrick, the worst "freak" known to Victorian medical science, a man whose body is hideously distorted into a grotesque parody of an elephant. Rescued from a travelling freak show by Sir Frederick Treves, Merrick gradually reveals himself to be a strangely sweet and gentle man, remarkably unembittered by the degradation and torment he suffered at the circus. Beautifully shot by Freddie Francis and with an excellent supporting cast including Sir John Gielgud, Anne Bancroft and Dame Wendy Hiller, The Elephant Man is a compelling, moving and enchanting story. The film was nominated for eight Oscars, including Best Picture, Best Director and Best Actor.