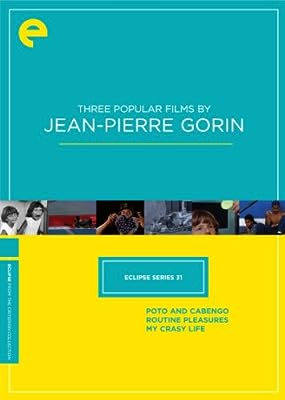 Price: $44.95
As of 2022-08-08 22:05:41 UTC (more info)
Product prices and availability are accurate as of 2022-08-08 22:05:41 UTC and are subject to change. Any price and availability information displayed on http://www.amazon.com/ at the time of purchase will apply to the purchase of this product.
Availability: Not Available - stock arriving soon
Buy Now from Amazon
Product Information (more info)
CERTAIN CONTENT THAT APPEARS ON THIS SITE COMES FROM AMAZON SERVICES LLC. THIS CONTENT IS PROVIDED 'AS IS' AND IS SUBJECT TO CHANGE OR REMOVAL AT ANY TIME.

Filmmaker Jean-Pierre Gorin, widely known for his early-seventies collaborations (including Tout va bien) with Jean-Luc Godard in the Dziga Vertov Group, established his singular voice with this trio of accomplished, fascinating, and nontraditional documentaries, made in Southern California after his relocation there. Poto and Cabengo (1978) is a compelling visit with two young San Diego twins who have invented their own language. In Routine Pleasures (1986), Gorin conjoins the story of a group of model train enthusiasts in Del Mar with a meditation on the work of critic and painter Manny Farber. And My Crasy Life (1992) is an expectation-shredding exploration of a Samoan gang in Long Beach. With these three films, Gorin excavates hidden communities that are a part of everyday American life, and shows himself to be a major chronicler of what is eccentric and beautiful in our common culture.

Gracie and Ginny are San Diego twins who speak unlike anyone else. Living largely cut off from the world, the two little girls have created a private form of communication that’s an amalgam of the English and German they hear at home. Jean-Pierre Gorin’s free-form, polyphonic nonfiction investigation into this phenomenon looks at the family from a variety of angles, with the director casting himself as a sociological detective of sorts. It’s a delightful and absorbing study of words and faces, mass media and personal isolation, and America’s odd margins.

What do a group of model-train enthusiasts and the legendary film critic and painter Manny Farber have in common? These two lines intersect in cultural inquisitor Jean-Pierre Gorin’s lovely and distinctly American film, which takes as its subject singular passions (the locomotive aficionados’ elaborately designed worlds in miniature; Farber’s teeming canvases) and expands to something richly philosophical, meditative, and surprisingly funny. Routine Pleasures is a masterful tribute to our hobbies and obsessions.

Jean-Pierre Gorin’s gripping and unique film about Samoan street gangs in Long Beach, California, is, like other works by the filmmaker, a probing look at a closed community with its own rules, rituals, and language. Part observational documentary, part fiction invisibly scripted and shaped by the director, My Crasy Life, which won a special jury prize at Sundance, is a resolutely unglamorous yet intensely compassionate examination of violence and dislocation.

Enter the Dragon "The Classic Colle...