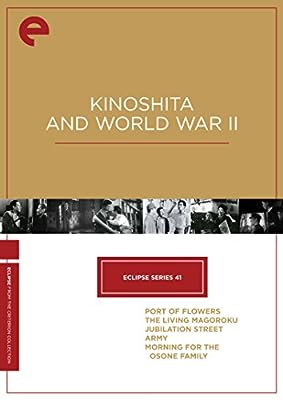 Price: $58.34
As of 2022-10-07 11:55:47 UTC (more info)
Product prices and availability are accurate as of 2022-10-07 11:55:47 UTC and are subject to change. Any price and availability information displayed on http://www.amazon.com/ at the time of purchase will apply to the purchase of this product.
Availability: Not Available - stock arriving soon
Buy Now from Amazon
Product Information (more info)
CERTAIN CONTENT THAT APPEARS ON THIS SITE COMES FROM AMAZON SERVICES LLC. THIS CONTENT IS PROVIDED 'AS IS' AND IS SUBJECT TO CHANGE OR REMOVAL AT ANY TIME.

Hugely popular in his home country of Japan, Keisuke Kinoshita worked tirelessly as a director for nearly half a century, making lyrical, sentimental films that often center on the inherent goodness of people, especially in times of distress. He began his directing career during a most challenging time for Japanese cinema: World War II, when the industry's output was closely monitored by the state and often had to be purely propagandistic. This collection of Kinoshita's first films four made while the war was going on and one shortly after Japan's surrender demonstrates the way the filmmaker's humanity and exquisite cinematic technique shone through even in the darkest of times.

THE LIVING MAGOROKU
Keisuke Kinoshita 1943
A superstitious farming family is hesitant to use its fields to grow crops to help feed the nation's troops.

JUBILATION STREET
Keisuke Kinoshita 1944
As World War II escalates, the tight-knit inhabitants of a street in Tokyo must relocate from their homes so the government can use the space.

ARMY
Keisuke Kinoshita 1944
Kinoshita's ambitious and intensely moving film begins as a multigenerational epic about the military legacy of one Japanese family, before settling into an emotionally complex portrayal of parental love during wartime.

MORNING FOR THE OSONE FAMILY
Keisuke Kinoshita 1946
Kinoshita's first film after the end of World War II is a wrenching, superbly wrought tale about a liberal-minded Japanese family torn apart by war and imperialist politics.