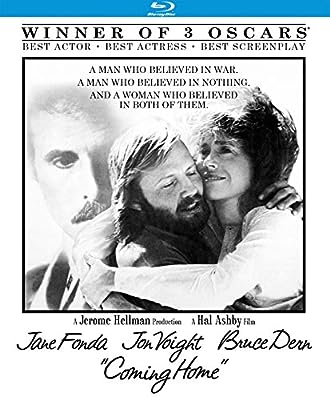 Price: $19.99
As of 2023-02-02 01:39:44 UTC (more info)
Product prices and availability are accurate as of 2023-02-02 01:39:44 UTC and are subject to change. Any price and availability information displayed on http://www.amazon.com/ at the time of purchase will apply to the purchase of this product.
Availability: Not Available - stock arriving soon
Buy Now from Amazon
Product Information (more info)
CERTAIN CONTENT THAT APPEARS ON THIS SITE COMES FROM AMAZON SERVICES LLC. THIS CONTENT IS PROVIDED 'AS IS' AND IS SUBJECT TO CHANGE OR REMOVAL AT ANY TIME.

Perhaps the most compelling picture ever made about the shattering aftermath of the Vietnam War, Coming Home earned eight Academy Award nominations and won three for Best Actress (Jane Fonda), Actor (Jon Voight) and Original Screenplay. Coming Home is a heartrending and unforgettable examination of a critical period in our nation's history and an uncompromising, extraordinarily moving film directed by the great Hal Ashby (The Last Detail). When Marine Captain Bob Hyde (Bruce Dern, Black Sunday) leaves for Vietnam, his wife Sally (Jane Fonda, Klute) volunteers at a local hospital. There she meets Luke Martin (Jon Voight, Deliverance), a former sergeant whose war injury has left him a paraplegic. Embittered with rage and filled with frustration, Luke finds new hope and confidence through his growing intimacy with Sally. The relationship transforms Sally's feeling about life, love and the horrors of war. And when, wounded and disillusioned, Sally's husband returns home, all three must grapple with the full impact of a brutal distant war that has changed their lives forever. The stellar supporting cast includes Robert Carradine (The Big Red One) and Robert Ginty (The Exterminator).