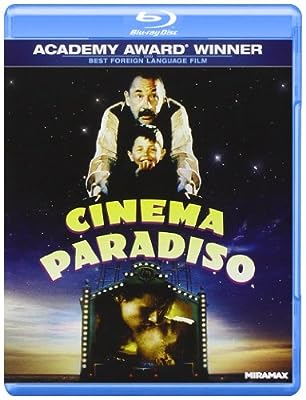 Price: $9.99
Availability: Not Available - stock arriving soon
Buy Now from Amazon
Product Information (more info)
CERTAIN CONTENT THAT APPEARS ON THIS SITE COMES FROM AMAZON SERVICES LLC. THIS CONTENT IS PROVIDED 'AS IS' AND IS SUBJECT TO CHANGE OR REMOVAL AT ANY TIME.

Giuseppe Tornatore's Cinema Paradiso is one of the most enchanting and magical tales about the love and nostalgia of going to the movies. Its an epic story about a young boys childhood love for films in the village of Giancaldo, Sicily and how he spends every waking moment at the local movie house titled Cinema Paradiso, which in a way becomes a surrogate father for him after his father is killed in the war. Night after night Toto becomes entranced with the awe and wonder of the movies as he watches Alfredo who is in control of the projection booth unleash his dream-like images right on the theatre screen. At first Alfredo tries to chase the young boy away but within time he begins to accept his presence within the projection booth, and the two develop a long lasting friendship that spans over decades.

Academy Award winner for Best Foreign Language Film, Cinema Paradiso is the beautiful, enchanting story of a young boy's lifelong love affair with the movies. Set in an Italian village, Salvatore finds himself enchanted by the flickering images at the Cinema Paradiso, yearning for the secret of the cinema's magic. When the projectionist, Alfredo, agrees to reveal the mysteries of moviemaking, a deep friendship is born. The day comes for Salvatore to leave the village and pursue his dream of making movies of his own. Thirty years later he receives a message that beckons him back home to a secret, beautiful discovery that awaits him in this acclaimed film from director Giuseppe Tornatore.

When released in 1988 Cinema Paradiso became loved by critics and audiences alike and the film won the Academy Award for best foreign language film. And yet interestingly enough, the film that critics and audiences loved wasn't necessarily the film that director Giuseppe Tornatore intended to make. The studios trimmed 51 minutes from the original film which went into much more detail about the love between Salvatore and Elena. We always place our faith in the director of the film, in that they are the intended visionary of the story and that they are always right; and its the studios who interfere and want to change the film who are butchers and who are in the wrong. I recommend seeing both versions and to judge for yourself on which one you personally prefer, because in its own way those extra 51 minutes in the original cut play as an entirely new film with an entirely different meaning for the story.