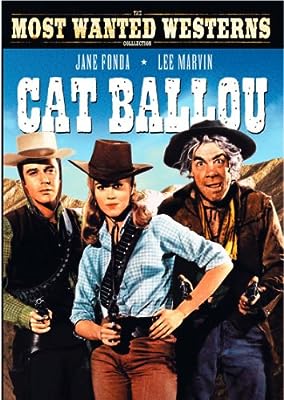 Price: $9.87
As of 2022-08-19 02:27:38 UTC (more info)
Product prices and availability are accurate as of 2022-08-19 02:27:38 UTC and are subject to change. Any price and availability information displayed on http://www.amazon.com/ at the time of purchase will apply to the purchase of this product.
Availability: Not Available - stock arriving soon
Buy Now from Amazon
Product Information (more info)
CERTAIN CONTENT THAT APPEARS ON THIS SITE COMES FROM AMAZON SERVICES LLC. THIS CONTENT IS PROVIDED 'AS IS' AND IS SUBJECT TO CHANGE OR REMOVAL AT ANY TIME.

The sleeper hit of 1965, CAT BALLOU was declared an instant classic when its sly blend of Western parody and rapid-fire action hit the screen. Lee Marvin won an Oscar(r) for Best Actor in his dual role as both Tim Strawn, a noseless ("it got bit off in a fight") gunslinger, and as Kid Shelleen, the woozy, boozy, has-been who goes up against Strawn at high noon. In accepting the award, Marvin said, "I think half of this belongs to a horse somewhere in the Valley," referring to the hilarious scene where Marvin and the horse both lean against a shed in a drunken stupor (certainly one ofthe most famous sight gags ever). Jane Fonda, at the height of her sex-kitten period, stars as Catherine "Cat" Ballou, the schoolmarm-turned-outlaw who teams with Kid to protect her father's ranch from a greedy railroad tycoon. Filmed in just 32 days, CAT BALLOU went on to become one of the biggestbox office hits of 1965, proving the popularity of the Western spoof. Singer Nat King Cole and comedian Stubby