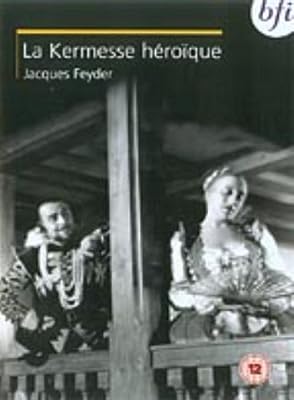 Price: $39.98
As of 2022-11-27 18:11:10 UTC (more info)
Product prices and availability are accurate as of 2022-11-27 18:11:10 UTC and are subject to change. Any price and availability information displayed on http://www.amazon.com/ at the time of purchase will apply to the purchase of this product.
Availability: Not Available - stock arriving soon
Buy Now from Amazon
Product Information (more info)
CERTAIN CONTENT THAT APPEARS ON THIS SITE COMES FROM AMAZON SERVICES LLC. THIS CONTENT IS PROVIDED 'AS IS' AND IS SUBJECT TO CHANGE OR REMOVAL AT ANY TIME.

United Kingdom released, PAL/Region 2 DVD: it WILL NOT play on standard US DVD player. You need multi-region PAL/NTSC DVD player to view it in USA/Canada: LANGUAGES: French ( Mono ), English ( Subtitles ), SPECIAL FEATURES: Biographies, Interactive Menu, Scene Access, SYNOPSIS: Released in France as La Kermesse Heroique, Carnival in Flanders is set during the long-ago war between the Dutch and Spanish. A tiny village in Flanders is invaded by Spanish troops. The townsfolk have heard of Spanish cruelties in other towns, and decide to deflect the vanquishers by playing dead. This isn't terribly effective (you have to take a breath once in a while), so the wife of the burgomaster tries to soften up the invaders with a lavish carnival. So successful is this venture that the Spaniards allow the village to escape being decimated, or even taxed. An award-winner many times over, Carnival in Flanders was banned in Germany; evidently, Goebbels caught on that director Jacques Feyder and scenarists Bernard Zimmer and Charles Spaak were drawing deliberate parallels between the Spanish and the then-burgeoning Nazis. SCREENED/AWARDED AT: Venice Film Festival, ...Carnival in Flanders ( La Kermesse héroïque )