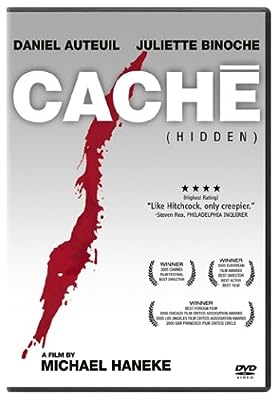 Price: $14.99
As of 2022-12-06 13:45:22 UTC (more info)
Product prices and availability are accurate as of 2022-12-06 13:45:22 UTC and are subject to change. Any price and availability information displayed on http://www.amazon.com/ at the time of purchase will apply to the purchase of this product.
Availability: Not Available - stock arriving soon
Buy Now from Amazon
Product Information (more info)
CERTAIN CONTENT THAT APPEARS ON THIS SITE COMES FROM AMAZON SERVICES LLC. THIS CONTENT IS PROVIDED 'AS IS' AND IS SUBJECT TO CHANGE OR REMOVAL AT ANY TIME.

Academy Award(r)-winner Juliette Binoche (1997, Best Supporting Actress, The English Patient) stars in CACHÉ, a psychological thriller about a TV talk show host and his wife who are terrorized by surveillance videos of their private life. Delivered by an anonymous stalker, the tapes reveal secret after secret until obsession, denial and deceit take hold of the couple and hurl them to the point of no return. CACHÉ is director Michael Haneke's dark vision of a relationship torn mercilessly apart by the camera's unblinking eye.

Hidden throughout Caché is the sense that you should be watching every moment in this film closely, just as the protagonists are themselves being watched by someone unknown. Georges and Anne Laurent’s (Daniel Auteuil and Juliette Binoche) enviable lives are terrorized by the sudden arrival on their doorstep of a videotaped recording of their Parisian townhouse. It’s nothing but a long, unedited shot of the façade of their house, but it’s disturbing nonetheless. Soon another arrives, this time of the farmhouse Georges grew up in, and then another of a car driving down a suburban street, and a walk down a hallway to a low-rent apartment. Again the videos are benign but unsettling. Then the mystery becomes more threatening when they receive gruesome postcards depicting child-like drawings of bloody, dead stick figures. Georges believes he knows who the culprit is, but for reasons all his own refuses to let his wife in on the secret. Clearly more is hidden here than just the identity of their stalker. In Caché, writer and director Michael Haneke skillfully, methodically pulls back multiple layers of deception, like new skin being pulled off an old wound. he masterfully fuses elements of his predecessors to create a film that is haunting and memorable. There is Bergman's fascination with the complexity of relationships, the suspense and lurking danger of Hitchcock, and the unique cinematic sensibility of Antonioni. In fact, the provocative final shot is practically a tribute to The Passenger--a lot of people will want to rewatch it many times to see what they can find in it (if, after watching it, you are still unsatisfied with the resolution, then watch the interview with Haneke in the DVD's special features for his insights). It's a film of great effect and intrigue. There are no easy resolutions, and the answers given in this mystery will only lead to more questions. --Daniel Vancini