By Brakhage: An Anthology, Vol. 1 (The Criterion Collection) 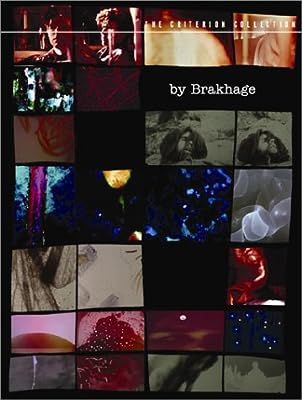 Price: $38.16
As of 2022-12-06 10:31:35 UTC (more info)
Product prices and availability are accurate as of 2022-12-06 10:31:35 UTC and are subject to change. Any price and availability information displayed on http://www.amazon.com/ at the time of purchase will apply to the purchase of this product.
Availability: Not Available - stock arriving soon
Buy Now from Amazon
Product Information (more info)
CERTAIN CONTENT THAT APPEARS ON THIS SITE COMES FROM AMAZON SERVICES LLC. THIS CONTENT IS PROVIDED 'AS IS' AND IS SUBJECT TO CHANGE OR REMOVAL AT ANY TIME.

Working completely outside the mainstream, Stan Brakhage has made nearly 400 films over the past half century. Challenging all taboos in his exploration of "birth, sex, death, and the search for God," Brakhage has turned his camera on explicit lovemaking, childbirth, even actual autopsy. Many of his most famous works pursue the nature of vision itself and transcend the act of filming. Some, including the legendary Mothlight, were made without using a camera at all. Instead, Brakhage has pioneered the art of making images directly on film itself––starting with clear leader or exposed film, then drawing, painting, and scratching it by hand. Treating each frame as a miniature canvas, Brakhage can produce only a quarter- to a half-second of film a day, but his visionary style of image-making has changed everything from cartoons and television commercials to MTV music videos and the work of such mainstream moviemakers as Martin Scorsese, David Fincher, and Oliver Stone.

Criterion is proud to present 26 masterworks by Stan Brakhage in high-definition digital transfers made from newly minted film elements. For the first time on DVD, viewers will be able to look at Brakhage's meticulously crafted frames one by one.

While you go out to see most other kinds of movies, you must go inward to see the extraordinary avant-garde films of Stan Brakhage. Foremost among American experimental film artists, Brakhage influenced the evolution of the moving image for nearly 50 years (his impact is readily seen on MTV), and this meticulously prepared Criterion Collection anthology represents a virtual goldmine of Brakhage's finest, most challenging work. Challenging because--as observed by Brakhage film scholar Fred Camper in the accompanying booklet--these 26 carefully selected films require the viewer to be fully receptive to "the act of seeing with one's own eyes" (to quote the title of one film, consisting entirely of autopsy footage), which is to say, open to the perceptual and psychological responses that are provoked by Brakhage's non-narrative shorts, ranging here from nine seconds to 31 minutes in length. While "Dog Star Man" (1961-64) is regarded as Brakhage's masterpiece, what emerges from this superb collection is the creative coherence of Brakhage's total vision. Through multilayered textures (often painted or scratched directly on film) and infinite combinations of imagery and rhythmic cutting, these films (most of them soundless) represent the most daring and purely artistic fulfillment of Criterion's ongoing goal to preserve important films on DVD. --Jeff Shannon

Black Moon (The Criterion Collection) [B...