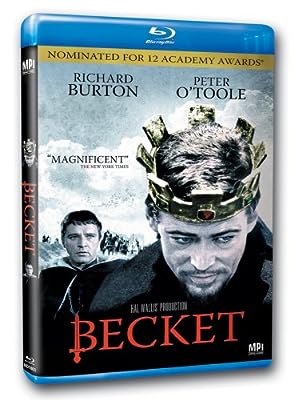 Price: $34.98
As of 2023-02-04 10:43:06 UTC (more info)
Product prices and availability are accurate as of 2023-02-04 10:43:06 UTC and are subject to change. Any price and availability information displayed on http://www.amazon.com/ at the time of purchase will apply to the purchase of this product.
Availability: Not Available - stock arriving soon
Buy Now from Amazon
Product Information (more info)
CERTAIN CONTENT THAT APPEARS ON THIS SITE COMES FROM AMAZON SERVICES LLC. THIS CONTENT IS PROVIDED 'AS IS' AND IS SUBJECT TO CHANGE OR REMOVAL AT ANY TIME.

For the first time in more than forty years, experience two of the greatest actors of our time in one of the most honored motion pictures in history. Peter O Toole delivers an electrifying performance as the mischievous Henry II, who surprises England by naming his fellow rogue and trusted valet Thomas Becket (Richard Burton in a career defining role) as Chancellor. But when Henry next appoints him Archbishop of Canterbury, Becket shocks the world by openly defying the King with his newfound faith and compassion. Will a desperate ruler now destroy a beloved friend to save his splintering kingdom? John Gielgud co-stars in this stunning epic based on the Broadway sensation and brought to the screen by Hall Wallis, the legendary producer of True Grit and Casablanca.

Once thought lost forever, BECKET has now been restored to its original majesty with the support of the Film Foundation and the Academy of Motion Picture Arts and Sciences, including breathtaking new 2.0 stereo and 5.1 Dolby Digital soundtracks and a revealing commentary by Peter O Toole.