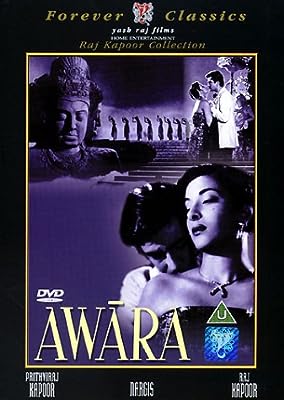 Price:
As of 2023-02-01 22:10:57 UTC (more info)
Product prices and availability are accurate as of 2023-02-01 22:10:57 UTC and are subject to change. Any price and availability information displayed on http://www.amazon.com/ at the time of purchase will apply to the purchase of this product.
Availability: Not Available - stock arriving soon
Buy Now from Amazon
Product Information (more info)
CERTAIN CONTENT THAT APPEARS ON THIS SITE COMES FROM AMAZON SERVICES LLC. THIS CONTENT IS PROVIDED 'AS IS' AND IS SUBJECT TO CHANGE OR REMOVAL AT ANY TIME.

Leaving the house of strict disciplinarian father, a judge,(Prithviraj Kapoor), who has disowned his wife (Leela Chitnis) and thrown her out on the flimsiest of suspicions, Raj Kapoor opts for leading the life of a vagabond (Awara). Living on his wits, committing small crimes to keep body and soul together, and supporting his mother, Raj teams up with Jagga, (K. N. Singh), a known criminal. He has vowed revenge on his father and in the act of vengeance lands up in his fathers court as an accused. His defense is taken up by Rita (Nargis), his childhood sweetheart. Putting the judge himself on the witness stand, she demonstrates that Raj is not a born criminal, but a victim of circumstance and parental prejudice. The climatic scene where the father and son come together is truly heart wringing. Beautifully photographed by Radhu Karmakar, the film is set to music by Shankar Jaikishan. The film features the memorable all-time hit songs: Awara Hoon (Mukesh), Dum bhar jo udher mu phere (Lata and Mukesh), Ek bewafa se pyar kiya (Lata), Hum tumse mohabbat karke sanam (Mukesh) and the soul wrenching Aa jao tadapte hain armaan, ab raat gujarne wali hai (Lata).