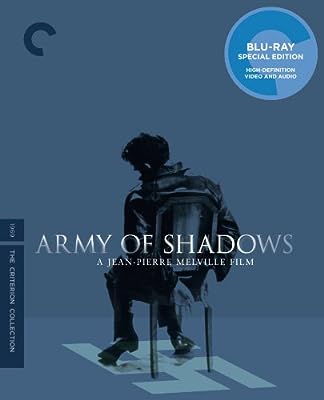 Jean-Pierre Melville's most personal film Army of Shadows is a bleak, brutal and haunting film that tells the true story on several members of the French Resistance who secretly tried to defeat the Nazi party. Unlike Melville's other films that usually involve calm and cool anti-heroes, daring police chases and thrilling heists, the characters in Army of Shadows are desperate, hungry and scared men and women who invisibly go through the Nazi occupation of France trying to defeat this uprising evil. This is not an action film or a war film because action creates excitement and releases tension, where Army of Shadows is more about the internal war within the Resistance members. Their army uses false names and no addresses, and they can be betrayed in an instant by a traitor or by one of their own members through the threat of their family or through fear and torture. And yet they persist and keep fighting even though we know because of the history that they won't succeed. These men and women in the resistance except their fate and they don't want or expect any award besides the knowing they are doing the right thing.

This masterpiece by Jean-Pierre Melville (Le doulos, Le cercle rouge) about the French Resistance went unreleased in the United States for thirty-seven years, until its triumphant theatrical debut in 2006. Atmospheric and gripping, Army of Shadows is Melville’s most personal film, featuring Lino Ventura (Le deuxième souffle), Paul Meurisse (Diabolique), Jean-Pierre Cassel (The Discreet Charm of the Bourgeoisie), and the incomparable Simone Signoret (Casque d’or, Diabolique) as intrepid underground fighters who must grapple with their conception of honor in their battle against Hitler’s regime.

Melville couldn't have been a better director for the story of Army of Shadows because he was himself a member of the Resistance and could personally relate on the Resistance members internal struggles and how it feels to always live in constant fear not knowing if you'll make it through the next day. Unfortunately when Army of Shadows was first released the timing of it couldn't have been worse. Most of the respected French critics of the influential Cahiers du cinema destroyed the film because they saw it as a glorification of General Charles de Gaulee, who was president at the time and was despised as a traitor of the May 1968 uprising. Because of that the film was shelved and ignored for almost 40 years. In the mid 90s the Cahiers du cinema published a reconsideration of Melville and his film Army of Shadows which led to a restoration of the 35mm camera negative and finally was released internationally in 2006, and is now considered not only one of Melville's greatest films but a masterpiece of French cinema.