All Quiet on the Western Front (Universal Cinema Classics) 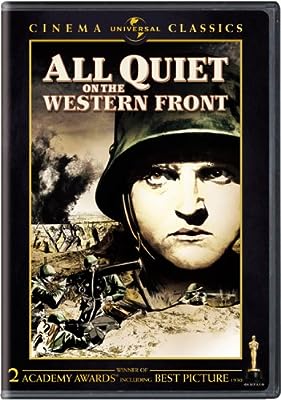 Price: $14.77
As of 2022-11-30 10:16:04 UTC (more info)
Product prices and availability are accurate as of 2022-11-30 10:16:04 UTC and are subject to change. Any price and availability information displayed on http://www.amazon.com/ at the time of purchase will apply to the purchase of this product.
Availability: Not Available - stock arriving soon
Buy Now from Amazon
Product Information (more info)
CERTAIN CONTENT THAT APPEARS ON THIS SITE COMES FROM AMAZON SERVICES LLC. THIS CONTENT IS PROVIDED 'AS IS' AND IS SUBJECT TO CHANGE OR REMOVAL AT ANY TIME.

Relive the drama, conflict and power of one of the most influential anti-war films ever made - All Quiet on the Western Front. Universal's first Best Picture Academy Award winner is now available in its original glory with a digitally remastered picture restored by the Library of Congress. Follow a group of idealistic young men as they join the German Army during World War I and are assigned to the Western Front, where their patriotism is destroyed by the harsh realities of combat. The hard-hitting, timeless masterpiece returns with stunning visual enhancement to its deserving place in film history! " ****! Time hasn't dimmed its power, or poignancy, one bit." (Leonard Maltin)

If a classic movie can be measured by the number of indelible images it burns into the collective imagination, then All Quiet on the Western Front's status is undisputed. Since its release in 1930 (and Oscar win for best picture), this film's saga of German boys avidly signing up for World War I battle--and then learning the truth of war--has been acclaimed for its intensity, artistry, and grown-up approach. Director Lewis Milestone's technical expertise is already stunning in the great opening sequence, as a professor exhorts his students to volunteer for the glory of the Fatherland while troops march past the windows. Erich Maria Remarque's novel is faithfully followed, but Milestone's superbly composed frames make it physical: the first battle scene, with the camera prowling the trenches as they fill with death and chaos, was surely the Saving Private Ryan of its day. The cast is strong, with little-known Lew Ayres finding stardom in the lead (Ayres became a pacifist and conscientious objector during World War II; although he served in battle as a medic, the stance harmed his career). And the images are indelible: Ayres' lonely look back at the disappearing troop truck; the blinded soldier who runs into enemy fire at night; the fine pair of boots wasted on a boy with an amputated leg; and the final, devastating seconds, arguably the defining cinematic image of war in the 20th century. --Robert Horton

A Night at the Opera