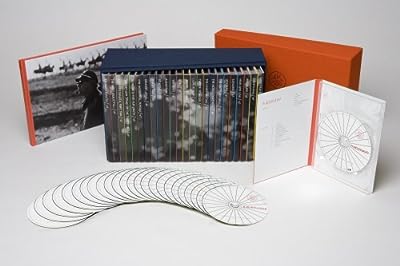 Price: $1,488.99
As of 2023-02-01 10:35:58 UTC (more info)
Product prices and availability are accurate as of 2023-02-01 10:35:58 UTC and are subject to change. Any price and availability information displayed on http://www.amazon.com/ at the time of purchase will apply to the purchase of this product.
Availability: Not Available - stock arriving soon
Buy Now from Amazon
Product Information (more info)
CERTAIN CONTENT THAT APPEARS ON THIS SITE COMES FROM AMAZON SERVICES LLC. THIS CONTENT IS PROVIDED 'AS IS' AND IS SUBJECT TO CHANGE OR REMOVAL AT ANY TIME.

The creator of such timeless masterpieces as Rashomon, Ikiru, Seven Samurai, Yojimbo, and High and Low, Akira Kurosawa is one of the most influential and beloved filmmakers who ever lived—and for many the greatest artist the medium has known. Now, on the occasion of the centenary of his birth, the Criterion Collection is proud to present this deluxe box set celebrating his astonishing career. Featuring twenty-five of the films he made over the course of his fifty years in movies—from samurai epics to postwar noirs to Shakespeare adaptations—AK 100 is the most complete set of his works ever released in this country, and includes four rare films that have never been available on DVD.

Includes:
Sanshiro Sugata (1943)
Akira Kurosawa’s dazzling debut as a director is about the rivalry between judo and jujitsu, and it concerns the moral education and enlightenment of Sanshiro, played by Susumu Fujita.

The Most Beautiful (1944)
Akira Kurosawa’s patriotic World War II morale booster focuses on a volunteer corps of women working at an optics factory to produce lenses for binoculars and targeting scopes, and was shot on location at the Nippon Kogaku factory in Hiratsuka.

Sanshiro Sugata Part Two (1945)
This sequel to Akira Kurosawa’s first film, which Kurosawa was compelled to make under studio pressure, reunites most of the principal cast members from the original.

No Regrets for Our Youth (1946)
In Akira Kurosawa’s first film after the end of World War II, future beloved Ozu regular Setsuko Hara gives an astonishing performance as Yukie, who transforms herself from genteel bourgeois daughter to independent social activist during a tumultuous decade in Japanese history.

One Wonderful Sunday (1947)
This affectionate paean to young love is also a frank examination by Akira Kurosawa of the harsh realities of postwar Japan. During a Sunday trip into war-ravaged Tokyo, Yuzo and Masako look for work and lodging, as well as affordable entertainments to pass the time.

Drunken Angel (1948)
In this powerful early noir from the great Akira Kurosawa, Toshiro Mifune bursts onto the screen as a volatile, tubercular criminal who strikes up an unlikely relationship with Takashi Shimura’s jaded physician.

Stray Dog (1949)
When a pickpocket steals a rookie detective’s gun on a hot, crowded bus, the cop goes undercover in a desperate attempt to right the wrong. Kurosawa’s thrilling noir probes the squalid world of postwar Japan and the nature of the criminal mind.

Scandal (1950)
A handsome, suave Toshiro Mifune lights up the screen as painter Ichiro, whose circumstantial meeting with a famous singer is twisted by the tabloid press into a torrid affair. Ichiro files a lawsuit against the seedy gossip magazine, but his lawyer, Hiruta (Takashi Shimura), is playing both sides.

Rashomon (1950)
The murder of a man and the rape of his wife in a forest grove—seen from four different perspectives. Akira Kurosawa’s meditation on the nature of “truth” transformed narrative cinema as we know it.

The Idiot (1951)
The Idiot, an adaptation of Fyodor Dostoyevsky’s masterpiece about a wayward, pure soul’s reintegration into society—updated by Kurosawa to capture Japan’s postwar aimlessness—was a victim of studio interference and public indifference. Today, this “folly” looks ever more fascinating.

Ikiru (1952)
An aging bureaucrat with stomach cancer decides to strip the veneer off his existence and find meaning in his final days. Considered by some to be Akira Kurosawa’s greatest achievement, Ikiru offers a multifaceted look at a life through a prism of perspectives.

Seven Samurai (1954)
In Akira Kurosawa’s Seven Samurai (Shichinin no samurai), sixteenth-century villagers hire the eponymous warriors to protect them from invading bandits. This gripping three-hour ride is one of the most beloved movie epics of all time.

I Live in Fear (1955)
I Live in Fear presents Toshiro Mifune as an elderly, stubborn businessman so fearful of a nuclear attack that he resolves to move his reluctant family to South America. Kurosawa depicts a society emerging from the shadows but still terrorized by memories of the past and anxieties for the future.

Throne of Blood (1957)
Akira Kurosawa’s Throne of Blood reimagines Macbeth in feudal Japan. Starring Kurosawa’s longtime collaborator Toshiro Mifune and the legendary Isuzu Yamada as his ruthless wife, the film tells of a valiant warrior’s savage rise to power and his ignominious fall.

The Hidden Fortress (1958)
A general and a princess must dodge enemy clans while smuggling the royal treasure out of hostile territory with two bumbling, conniving peasants at their sides; it’s a spirited adventure that only Akira Kurosawa could create.

Sanjuro (1962)
In Kurosawa’s sly companion piece to Yojimbo, the jaded samurai Sanjuro helps an idealistic group of young warriors weed out their clan’s evil influences, and in the process turns their image of a “proper” samurai on its ear.

High and Low (1963)
Toshiro Mifune is unforgettable as Kingo Gondo, a wealthy industrialist whose family becomes the target of a cold-blooded kidnapper in Akira Kurosawa’s highly influential High and Low, a compelling race-against-time thriller and a penetrating portrait of contemporary Japanese society.

Red Beard (1965)
A testament to the goodness of humankind, Akira Kurosawa’s Red Beard chronicles the tumultuous relationship between an arrogant young doctor and a compassionate clinic director (Toshiro Mifune, in his last role for Kurosawa).

Dodes’ka-den (1970)
By turns tragic and transcendent, Akira Kurosawa’s Dodes’ka-den follows the daily lives of a group of people barely scraping by in a slum on the outskirts of Tokyo. Kurosawa’s gloriously shot first color film displays all of his hopes, fears, and artistic passion.

Kagemusha (1980)
In his late, color masterpiece, Akira Kurosawa returns to the samurai film and to a primary theme of his career—the play between illusion and reality. Sumptuously reconstructing the splendor of feudal Japan and the pageantry of war, Kurosawa creates a meditation on the nature of power.

Madadayo (1993)
Kurosawa’s final film is a tribute to Hyakken Uchida (Tatsuo Matsmura), an educator and writer of enormously popular aphoristic stories. Based on Uchida’s writings, the film pieces a narrative together with distinct episodes—anecdotes and parties, ceremonies and celebrations.