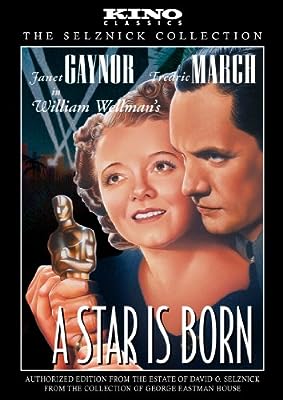 Price: $17.98
As of 2022-11-26 20:21:41 UTC (more info)
Product prices and availability are accurate as of 2022-11-26 20:21:41 UTC and are subject to change. Any price and availability information displayed on http://www.amazon.com/ at the time of purchase will apply to the purchase of this product.
Availability: Not Available - stock arriving soon
Buy Now from Amazon
Product Information (more info)
CERTAIN CONTENT THAT APPEARS ON THIS SITE COMES FROM AMAZON SERVICES LLC. THIS CONTENT IS PROVIDED 'AS IS' AND IS SUBJECT TO CHANGE OR REMOVAL AT ANY TIME.

Esther Blodgett (Janet Gaynor) is just another starry-eyed farm kid trying to break into the movies. Waitressing at a Hollywood
party, she catches the eye of alcoholic star Norman Maine (Frederic March), is given a shot at stardom, and is caught up in the
Hollywood glamour machine . She and her idol Norman marry; but as her star rises, his comes crashing down. Nominated for Six Academy Awards including BEST PICTURE, BEST ACTOR, BEST ACTRESS, BEST DIRECTOR, BEST SCREENPLAY, BEST ASSISTANT DIRECTOR. Won Academy Awards for Best Original Screenplay and an Honorary Award for groundbreaking color photography. This Kino Classics Edition is the only version AUTHORIZED FROM THE ESTATE OF DAVID O. SELZNICK FROM THE COLLECTION OF GEORGE EASTMAN HOUSE.

All Quiet on the Western Front (Blu-ray ...

Anatomy of a Murder (The Criterion Colle...