A Man for All Seasons (Special Edition) 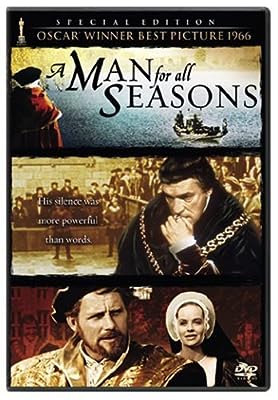 Price: $9.99
As of 2022-08-14 15:24:44 UTC (more info)
Product prices and availability are accurate as of 2022-08-14 15:24:44 UTC and are subject to change. Any price and availability information displayed on http://www.amazon.com/ at the time of purchase will apply to the purchase of this product.
Availability: Not Available - stock arriving soon
Buy Now from Amazon
Product Information (more info)
CERTAIN CONTENT THAT APPEARS ON THIS SITE COMES FROM AMAZON SERVICES LLC. THIS CONTENT IS PROVIDED 'AS IS' AND IS SUBJECT TO CHANGE OR REMOVAL AT ANY TIME.

Adaptation of Robert Bolt's play about Sir Thomas More, a Catholic statesman in England who rebelled against Henry VIII's self-proclaimed status as the head of the Church of England and paid for his religious beliefs by having his head exhibited on London Bridge.

Robert Bolt's successful play was not considered a hot commercial property by Columbia Pictures--a period piece about a moral issue without a star, without even a love story. Perhaps that's why Columbia left director Fred Zinnemann alone to make A Man for All Seasons, as long as he stuck to a relatively small budget. The results took everyone by surprise, as the talky morality play became a box-office hit and collected the top Oscars for 1966. At the play's heart is the standoff between King Henry VIII (Robert Shaw, in young lion form) and Sir Thomas More (Paul Scofield, in an Oscar-winning performance). Henry wants More's official approval of divorce, but More's strict ethical and religious code will not let him waffle. More's rectitude is a source of exasperation to Cardinal Wolsey (Orson Welles in a cameo), who chides, "If you could just see facts flat on without that horrible moral squint." Zinnemann's approach is all simplicity, and indeed the somewhat prosaic staging doesn't create a great deal of cinematic excitement. But the language is worth savoring, and the ethical politics are debated with all the calm and majesty of an absorbing chess game. --Robert Horton

Stills from A Man for All Seasons (click for larger image)

Beyond A Man for All Seasons at Amazon.com