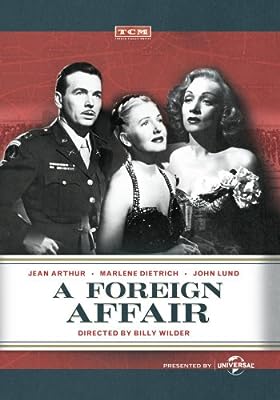 Price: $19.98
As of 2023-02-01 11:05:20 UTC (more info)
Product prices and availability are accurate as of 2023-02-01 11:05:20 UTC and are subject to change. Any price and availability information displayed on http://www.amazon.com/ at the time of purchase will apply to the purchase of this product.
Availability: Not Available - stock arriving soon
Buy Now from Amazon
Product Information (more info)
CERTAIN CONTENT THAT APPEARS ON THIS SITE COMES FROM AMAZON SERVICES LLC. THIS CONTENT IS PROVIDED 'AS IS' AND IS SUBJECT TO CHANGE OR REMOVAL AT ANY TIME.

Starring Jean Arthur and Marlene Dietrich, A FOREIGN AFFAIR is a cynical satire that mirrors the bewildering moral climate of the late 1940s. Phoebe Frost Arthur), an upright Republican member of Congress, travels to Berlin to look into reports of corruption among the occupying American forces. She enlists an army captain (John Lund) in her crusade and finds herself falling for him, unaware that he is the man romantically involved with a German cabaret singer Dietrich) who can lead army investigators to a high-level Nazi war criminal.