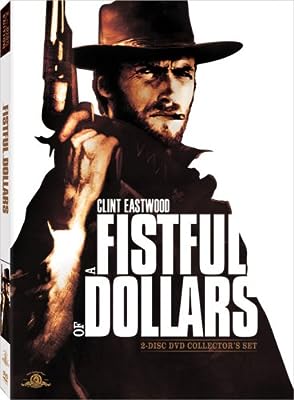 Price: $12.98
As of 2023-02-01 16:02:22 UTC (more info)
Product prices and availability are accurate as of 2023-02-01 16:02:22 UTC and are subject to change. Any price and availability information displayed on http://www.amazon.com/ at the time of purchase will apply to the purchase of this product.
Availability: Not Available - stock arriving soon
Buy Now from Amazon
Product Information (more info)
CERTAIN CONTENT THAT APPEARS ON THIS SITE COMES FROM AMAZON SERVICES LLC. THIS CONTENT IS PROVIDED 'AS IS' AND IS SUBJECT TO CHANGE OR REMOVAL AT ANY TIME.

Clint Eastwood's legendary "Man With No Name" makes his powerful debut in this thrilling, action-packed "new breed of western" (Motion Picture Herald) from the acclaimed director of The Good, the Bad and the Ugly and For a Few Dollars More. Exploding with blistering shootouts, dynamic performances and atmospheric cinematography, it's an undisputed classic of the genre. A mysterious gunman (Eastwood) has just arrived in San Miguel, a grim, dusty border town where two rival bands of smugglers are terrorizing the impoverished citizens. A master of the "quick-draw,"the stranger soon receives offers of employment from each gang. But his loyalty cannot be bought; he accepts both jobs...and sets in motion a plan to destroy both groups of criminals, pitting one against the other in a series of brilliantly orchestrated setups, showdowns and deadly confrontations.

Fists in the Pocket (The Criterion Colle...

I Vitelloni (The Criterion Collection)