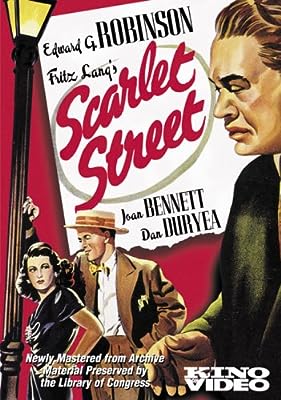 Price: $16.99
As of 2023-02-06 05:13:16 UTC (more info)
Product prices and availability are accurate as of 2023-02-06 05:13:16 UTC and are subject to change. Any price and availability information displayed on http://www.amazon.com/ at the time of purchase will apply to the purchase of this product.
Availability: Not Available - stock arriving soon
Buy Now from Amazon
Product Information (more info)
CERTAIN CONTENT THAT APPEARS ON THIS SITE COMES FROM AMAZON SERVICES LLC. THIS CONTENT IS PROVIDED 'AS IS' AND IS SUBJECT TO CHANGE OR REMOVAL AT ANY TIME.

Kino Video's remastered edition of Scarlet Street finally does justice to one of the best film noir classics of the 1940s. Less than a year after scoring a critical and popular success with The Woman in the Window, director Fritz Lang reunited with stars Edward G. Robinson, Joan Bennett, and Dan Duryea for this fatalistic New York City tale of a meek, middle-aged cashier and aspiring artist named Christopher Cross (Robinson) who unwittingly falls into a trap set by a pair of Greenwich Village con artists (Bennett, Duryea) who plot to sell his paintings and make off with the profits. In addition to Lang's masterful use of studio backlot locations and cinematographer Milton Krasner's exquisite control of light and shadow, the film draws its primary strength from the atypical performance by Robinson (typically so good at playing heavies, and a knowledgeable art collector off-screen) as a hen-pecked husband and self-professed failure whose withered ego makes him especially vulnerable to the false charms of Bennett, a femme fatale as heartless as she is ultimately doomed. Her scandalous behavior on screen and off (Bennett was the wife of producer Walter Wanger and Lang's mistress) and Duryea's pimpish amorality made Scarlet Street both immensely popular and scandalous enough to be banned in three states when the film was released in late 1945, but in Lang's dark vision of corrupted souls and avenging angels, nobody goes unpunished. The ending of Scarlet Street is as unforgiving as it is unforgettable, and in the hands of Fritz Lang, it's the purest essence of film noir at its finest. Kino's DVD release offers a high-definition digital transfer from a 35-millimeter negative preserved by the Library of Congress (in other words, it puts every previous video release to shame), and there's an astute, scholarly commentary by Lang expert David Kalat that puts Scarlet Street into critical perspective with Lang's career and film noir in general. For fans of the genre, this is a must-own DVD. --Jeff Shannon