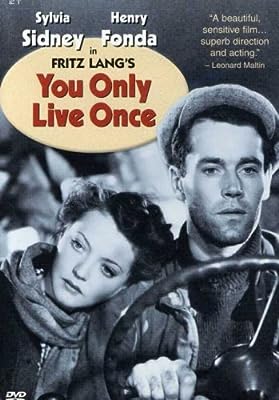 Price: $19.99
As of 2023-02-08 04:52:22 UTC (more info)
Product prices and availability are accurate as of 2023-02-08 04:52:22 UTC and are subject to change. Any price and availability information displayed on http://www.amazon.com/ at the time of purchase will apply to the purchase of this product.
Availability: Not Available - stock arriving soon
Buy Now from Amazon
Product Information (more info)
CERTAIN CONTENT THAT APPEARS ON THIS SITE COMES FROM AMAZON SERVICES LLC. THIS CONTENT IS PROVIDED 'AS IS' AND IS SUBJECT TO CHANGE OR REMOVAL AT ANY TIME.

Convicted felon Eddie Taylor (Academy Award-winner Henry Fonda) decides to lead the straight life with his devoted girlfriend, Joan (Sylvia Sidney), who arranges for his early parole. She agrees to marry him, but a bank robbert gone bad points accusing fingers at the innocent Eddie. Taking Joan on the lam, Eddie is caught in a cat and mouse chase with the law closing in just a few steps behind them! This haunting and beautifully stylish gem from master director Fritz Lang (Metropolis, M) was the first of his remarkable film noir classics including The Big Heat and Clash by Night. Hard-hitting and unforgettable, this exciting tale of crime and revenge inspired countless "criminal lovers on the run" classics like Bonnie and Clyde and The Getaway but remains the final word in searing, tragic and romantic suspense!

Depression-era Hollywood produced a slew of movies about sympathetic criminals victimized by an unfeeling society. No other has the power of Fritz Lang's You Only Live Once, the director's second American film and a masterpiece of fatalism. Henry Fonda is the convict released to a new life (encouraged to go straight, he growls, "I will if they let me"--not a hopeful note); Sylvia Sidney is his new bride, convinced of his essential goodness. Their homely dreams are crushed by a hostile world, which Lang's scrupulously controlled direction turns into a series of dead ends. In particular, the last half of the picture--a prison break and cross-country ramble inspired by Bonnie and Clyde--is an exceptionally intense downward spiral, swift with predestined momentum. While Fonda and Sidney are unforgettable in their echt-Thirties forms, Lang is the star, proving the director of M and Metropolis had lost none of his edge. --Robert Horton