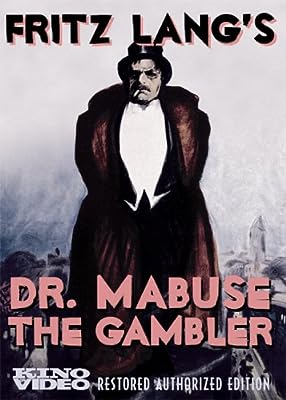 Price: $25.16
As of 2023-02-06 06:05:52 UTC (more info)
Product prices and availability are accurate as of 2023-02-06 06:05:52 UTC and are subject to change. Any price and availability information displayed on http://www.amazon.com/ at the time of purchase will apply to the purchase of this product.
Availability: Not Available - stock arriving soon
Buy Now from Amazon
Product Information (more info)
CERTAIN CONTENT THAT APPEARS ON THIS SITE COMES FROM AMAZON SERVICES LLC. THIS CONTENT IS PROVIDED 'AS IS' AND IS SUBJECT TO CHANGE OR REMOVAL AT ANY TIME.

Dr. Mabuse - criminal genius, psychologist, hypnotist, counterfeiter, card shark, master of disguise, thief of state secrets and ruler of a sinister empire founded on selfishness, chicanery and murder--gained his first screen incarnation in this monumental film by Fritz Lang, one of cinema's greatest directors. Made in 1922 and subtitled "A Picture of Our Time," "Dr. Mabuse, The Gambler" is indeed a snapshot of a historical moment when Germany was likened to Sodom and Gomorrah.

It's hard to imagine that the razor-sharp Kino DVD of Fritz Lang's first magnum opus fails to capture any of the visual electricity and heady atmosphere experienced by Berlin filmgoers in 1922. The film's historical importance to the crime-film genre and its thematic relevance to the director's later work have never been in dispute, but with only murky, choppy editions to go by, the movie has largely been paid lip service for its legacy rather than appreciated for itself. Now, thanks to this definitive restoration by the Murnau Institute, we can properly see it and experience it.

Dr. Mabuse the Gambler is actually two films in one--or, more precisely, one film in two feature-length parts totaling four-and-a-half hours and conceived to be watched on consecutive evenings. Its title character is a criminal mastermind with the power and the will to orchestrate complex capers, counterfeit national currencies, manipulate the stock market, and hypnotically bend anyone to play a role in his diabolical designs. The hand of Mabuse seems to reach everywhere--for the excellent reason that the Doctor himself, a master of disguise, turns out to be just about anywhere at just the moment his intervention will wreak havoc and wreck lives. (He's played by Rudolf Klein-Rogge, who would repeat the part ten years later in The Testament of Dr. Mabuse and also, in spirit if not in name, in Lang's dazzling 1928 film Spies; he was also the inventor Rotwang in Metropolis--as well as, offscreen, the former husband of Lang's screenwriter wife Thea von Harbou!)

The film's title in German is Doktor Mabuse der Spieler, and our supervillain is really less a gambler (all his games of chance are rigged) than a player: playing multiple roles, but even more importantly, playing with others' lives, playing with the very fabric of modern reality. The subtitles of the two parts are "A Picture of the Time" and "People of the Time"; the film is an artifact of the Weimar era when, as one character remarks, "We are bored and tired ... we need sensations of a very special kind to remain alive." Lang and his art directors, Otto Hunte and Karl Stahl-Urach, create a hallucinatory mise-en-scène in which the decor is at once stark and decadent, a playground for all manner of perverse spectacle and gamesmanship, a maze of corridors and doorways and streets where the modern and the gothic interlayer. This world ripe for Mabusian manipulation prefigured Hitler by a decade--and in one of his last declarations, the Doctor anticipates more contemporary visionaries of chaos: "I feel as a state within a state, with which I have always been at war." Fritz Lang continues to be a chillingly prophetic filmmaker. --Richard T. Jameson