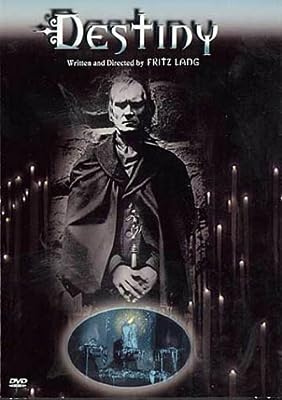 Price: $24.99
As of 2023-02-08 02:50:21 UTC (more info)
Product prices and availability are accurate as of 2023-02-08 02:50:21 UTC and are subject to change. Any price and availability information displayed on http://www.amazon.com/ at the time of purchase will apply to the purchase of this product.
Availability: Not Available - stock arriving soon
Buy Now from Amazon
Product Information (more info)
CERTAIN CONTENT THAT APPEARS ON THIS SITE COMES FROM AMAZON SERVICES LLC. THIS CONTENT IS PROVIDED 'AS IS' AND IS SUBJECT TO CHANGE OR REMOVAL AT ANY TIME.

This beautiful gothic fantasy was inspired by a childhood dream of its writer/director, Fritz Lang, who first gained world recognition with this film's triumph. "Destiny" is the story of a young man taken by Death just as he is to be married. His lover makes a deal with the Death figure--if she can save one of three possible lives, her fiance will be returned to her. Otherworldly atmosphere is created by extraordinary, bizarre sets, gothic lighting, and eccentric characters combined with spectacle and camera trickery astonishing for its time. With its many magical and haunting images, "Destiny" still possesses real power to impress the imagination!