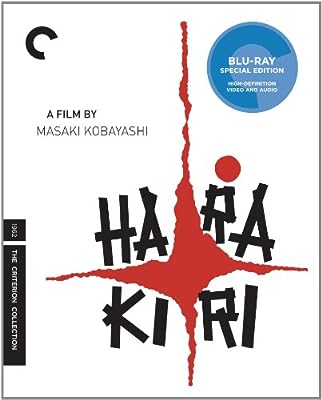 Price: $39.95
As of 2021-06-16 19:43:49 UTC (more info)
Product prices and availability are accurate as of 2021-06-16 19:43:49 UTC and are subject to change. Any price and availability information displayed on http://www.amazon.com/ at the time of purchase will apply to the purchase of this product.
Availability: Not Available - stock arriving soon
Buy Now from Amazon
Product Information (more info)
CERTAIN CONTENT THAT APPEARS ON THIS SITE COMES FROM AMAZON SERVICES LLC. THIS CONTENT IS PROVIDED 'AS IS' AND IS SUBJECT TO CHANGE OR REMOVAL AT ANY TIME.

Masaki Kobayashi's samurai masterpiece Harakiri is one of the most powerful and also the most complex because its story not only questions the morality of the individuals within the context of the story but it also questions the way of the Bushido Code that the samurai's have always respected and honored. This story is set in 1630 as the opening shot is of a wandering older samurai/ronin named Hanshiro Tsugumo who is unemployed and poor as he enters the gate of the Iyi Clan Lord. He requests permission to kill himself in the clan's forecourt and in front of all the Clan to see. The ritual act is known as harakiri, (or seppuku in Japan) which is a form of respectable suicide that involves the man to plunge in his own blade and move it from left to right as a designated master swordsman stands beside him to decapitate him with one powerful stroke once he feels the time is right and the samurai committing this act is proved admirable. Hanshiro's reason for harakiri to the clan of Iyi is because he feels he is an unemployed disgrace, but what the clan doesn't know is that he has arrived there with much different intentions.

Following the collapse of his clan, an unemployed samurai (Ran's Tatsuya Nakadai) arrives at the manor of Lord Iyi, begging to commit ritual suicide on his property. Iyi's clansmen, believing the desperate ronin is merely angling for a new position, try to force him to eviscerate himself— but they have underestimated his beliefs and his personal brand of honor. Winner of the 1963 Cannes Film Festival's Special Jury Prize, Harakiri, directed by Masaki Kobayashi (The Human Condition) is a fierce evocation of individual agency in the face of a corrupt and hypocritical system.

Samurai films similar to westerns have the ability to tell the most complex and challenging stories on the ethical, moral and even political questions of a character in the form of tradition and human tragedy. The great director Masaki Kobayashi often expressed many of his political views in his films in which he exposes the corrupt historical roots of Japanese injustice within the system whether it's in the past or in contemporary life. Harakiri is known to be his greatest film within that context in that it questions and exposes the corrupt abuses within the feudal authority and of the code of the Bushido and how it's flawed system hides behind a façade of respect and honor. Kobayashi was always a director who wanted to expose the hypocrisy of a corrupt and unjust government and this film condemns the violation of personal freedoms under the hierarchical structures of feudalism with Kobayashi saying during an interview, "In any era, I am critical of authoritarian power." The most iconic shot in the film is of the respected symbol of the Iyi clan and of its ancestors, which to simply describe it, is just an empty suit of armor; Which will be disgraced and exposed as the fake and hollow symbol it is.