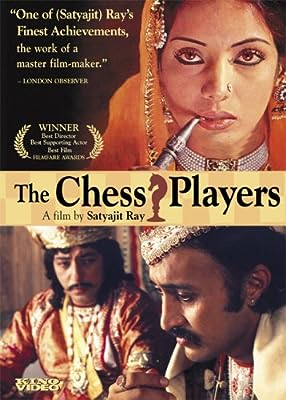 Price: $22.99
As of 2022-11-30 01:16:18 UTC (more info)
Product prices and availability are accurate as of 2022-11-30 01:16:18 UTC and are subject to change. Any price and availability information displayed on http://www.amazon.com/ at the time of purchase will apply to the purchase of this product.
Availability: Not Available - stock arriving soon
Buy Now from Amazon
Product Information (more info)
CERTAIN CONTENT THAT APPEARS ON THIS SITE COMES FROM AMAZON SERVICES LLC. THIS CONTENT IS PROVIDED 'AS IS' AND IS SUBJECT TO CHANGE OR REMOVAL AT ANY TIME.

In 1977's The Chess Players, Satyajit Ray India's "extraordinary filmmaker" (George Lucas), turned his celebrated eye for everyday life on his own country's trouble history. Made during Prime Minister Indira Gandhi's era of press censorship and curtailed constitutional rights, The Chess Players dared to examine India's future through its past. n the kingdom of Awadh, rich landowners Meer (Saeed Jaffrey, The Man Who Would Be King) and Mirza (Sanjeev Kumar, Sholay) pour every ounce of passion into a never-ending game of chess. At the same time, an ambitious British General (Sir Richard Attenborough, Jurassic Park) plots his own moves against Awadh's King (Amjad Khan) and Prime Minister (Victor Banerjee, A Passage to India), in the hope of taking the region for his Queen. Heedless of their political and family responsibilities, Mirza and Meer keep playing. But as British soldiers march on their homeland, an innocent game escalates into deadly confrontation and catastrophic loss. Rich, poor, winner or loser, everyone is revealed to be history's pawn. A film of "exquisite performances" (Variety) and epic sweep, the New York Times praised The Chess Players for "the manner in which an entire civilization has been encapsulated in a few particular gestures." Adapted from a short story by Hindi author Munshi Premchand, The Chess Players evenly examines both colonial greed and Indian aristocratic indolence with the same dramatic scrutiny. His first-ever historical drama. The Chess Players is imbued with the same "deep observation, understanding and love of the human race" (Akira Kurosawa) that made Satyaijit Ray one of the preeminent figures of international cinema.

Written, composed, and directed by Indian master Satyajit Ray (Pather Panchali), The Chess Players presents a stylized world in which the landed gentry lounge about, endlessly pulling on hookahs and engaging in the "king of games." Outside their gilded doors, the order that allows them this luxury--let alone their marriages--is crumbling. They couldn't be more oblivious. As the narrator notes, "Mr. Meer and Mr. Mirza are only playing at warfare. Their armies are pieces of ivory. Their battlefield: a piece of cloth." Set in 1856 Lucknow, the noblemen (Saeed Jaffrey and Sanjeev Kumar) are situated in one of the few Indian territories not ruled by Britain's East India Company. The British, meanwhile, are also playing a game of chess, and equally oblivious Oudh ruler Nawab Wajid Ali Shah (Amjad Khan) is the king they intend to capture. Forthright General Outram (Sir Richard Attenborough, Ghandi), assisted by the more culturally erudite Captain Weston (Tom Alter), is the man charged with the task. It shouldn’t be difficult: Like Meer and Mirza, Wajid would prefer to relax--to write poetry, to fly kites--rather than to rule. Along the way, Oudh will fall, but the chess will continue. Based on a story by Munshi Premchand, The Chess Players was Ray’s most elaborate production. It was also his first in Hindi (with English) and its frames are filled with music, dance, opulent pageantry, and humorous banter--even a lively animated sequence. Behind the attractive façade, however, lies a lament for lost opportunities. --Kathleen C. Fennessy