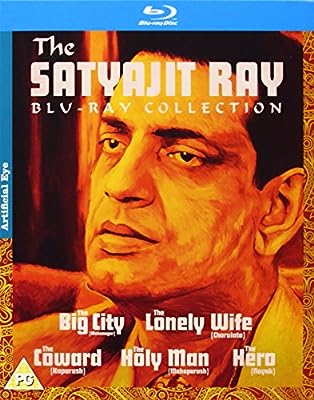 Price: $108.99
As of 2021-12-03 05:47:17 UTC (more info)
Product prices and availability are accurate as of 2021-12-03 05:47:17 UTC and are subject to change. Any price and availability information displayed on http://www.amazon.com/ at the time of purchase will apply to the purchase of this product.
Availability: Not Available - stock arriving soon
Buy Now from Amazon
Product Information (more info)
CERTAIN CONTENT THAT APPEARS ON THIS SITE COMES FROM AMAZON SERVICES LLC. THIS CONTENT IS PROVIDED 'AS IS' AND IS SUBJECT TO CHANGE OR REMOVAL AT ANY TIME.

United Kingdom released, Blu-Ray/Region B : it WILL NOT play on regular DVD player, or on standard US Blu-Ray player. You need multi-region Blu-Ray player to view it in USA/Canada: LANGUAGES: Bengali ( Dolby Digital 2.0 ), Bengali ( Mono ), English ( Subtitles ), SPECIAL FEATURES: Black & White, Box Set, Interactive Menu, Multi-DVD Set, Scene Access, SYNOPSIS: The Big City (1963) Life at home changes when a housewife from a middle-class, conservative family in Calcutta gets a job as a salesperson. The Lonely Wife (1964) The lonely wife of a newspaper editor falls in love with her visiting cousin-in-law, who shares her love for literature. The Coward (1965) A successful screenwriter (Soumitra Chatterjee) is traveling the country researching his next script when his car breaks down in a small town. The owner (Haradhan Bannerjee) of a nearby tea estate offers him a place to stay for the night, and the writer is surprised to discover that his former lover (Madhabi Mukherjee) is now married to the man. Ray makes the most out of this small cast and short time (the film takes place over the course of one day) to create an indelible portrait of missed opportunities. The Holy Man (1965) A devout Hindu family falls victim to a charlatan posing as a holy man. The Hero (1966) En route to Delhi to receive an award, a Bengali film star reevaluates his success through his fellow passengers, dreams and past experiences. SCREENED/AWARDED AT: Berlin International Film Festival, ...Satyajit Ray Collection - 5-Disc Box Set ( Mahanagar / Charulata / Kapurush / Mahapurush / Nayak ) ( The Big City / The Lonely Wife / The Cow