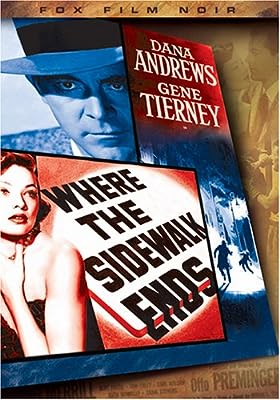 Price: $9.27
As of 2022-10-02 05:00:24 UTC (more info)
Product prices and availability are accurate as of 2022-10-02 05:00:24 UTC and are subject to change. Any price and availability information displayed on http://www.amazon.com/ at the time of purchase will apply to the purchase of this product.
Availability: Not Available - stock arriving soon
Buy Now from Amazon
Product Information (more info)
CERTAIN CONTENT THAT APPEARS ON THIS SITE COMES FROM AMAZON SERVICES LLC. THIS CONTENT IS PROVIDED 'AS IS' AND IS SUBJECT TO CHANGE OR REMOVAL AT ANY TIME.

A police detective beats a suspect to death, then tries to pin it on a mob boss. Directed by Otto Preminger.

Otto Preminger made four films noirs at Fox, all terrific. If we set aside the peerless Laura as more psychological mystery-romance than noir, there's plenty of evidence for judging Where the Sidewalk Ends the best of the lot (the other two being Fallen Angel, a study in small-town perversity, and Whirlpool, a delicious exercise in creepy psychology, slippery mise-en-scène, and daringly complicated point-of-view). It's a hard-edged tale of a borderline-vicious New York police detective, Mark Dixon (Dana Andrews), with tortuous personal reasons for overzealousness in going after the bad guys. Much of the film unreels in one night, when the murder of a high-roller from out of town precipitates a string of events that lead to Dixon's becoming an accidental killer. Preminger's direction is taut, forceful, and fluid, especially when Dixon sets about creating an alibi for himself. Unfortunately, an innocent man gets implicated, with Dixon looking on, and the guilty cop's moral and psychological torment increases with each turn of the screw.

Tightly scripted by Ben Hecht, Preminger's film lacks the anguished poetry of Nicholas Ray's On Dangerous Ground, another 1950 noir centered on a cop (Robert Ryan) addicted to ultraviolence, but its grip is relentless. Preminger had a shrewd instinct for tapping a certain thuggish strain in Andrews, whose performance here is arguably his best. They're reunited with Gene Tierney, as a woman caught in the sidewash of sordid goings-on, and Laura cameraman Joseph La Shelle, whose work has a luster beyond the accustomed semidocumentary look of Fox noirs. Gary Merrill, usually a bland nice-guy, relishes the chance to play nasty as Dixon's gangland bête noire Tommy Scalise, a homoerotic villain in the Tommy Udo vein with a menthol inhaler as fetish object. --Richard T. Jameson