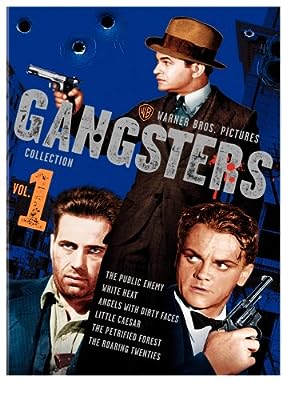 Price: $99.95
As of 2022-12-06 19:20:35 UTC (more info)
Product prices and availability are accurate as of 2022-12-06 19:20:35 UTC and are subject to change. Any price and availability information displayed on http://www.amazon.com/ at the time of purchase will apply to the purchase of this product.
Availability: Not Available - stock arriving soon
Buy Now from Amazon
Product Information (more info)
CERTAIN CONTENT THAT APPEARS ON THIS SITE COMES FROM AMAZON SERVICES LLC. THIS CONTENT IS PROVIDED 'AS IS' AND IS SUBJECT TO CHANGE OR REMOVAL AT ANY TIME.

For a knock-out combination of timeless entertainment and vintage studio history, you can't do much better than The Warner Brothers Gangsters Collection. In the 1930s and '40s, Paramount specialized in glossy comedies, MGM popularized lavish musicals, Universal produced signature horror classics, and Fox scored hits with sophisticated dramas. But it was Warner Bros. that generated controversy--if not always box-office profits--with so-called "social problem" films, and that meant gangsters. When viewed in their pre- and post-Prohibition context and in chronological order (Little Caesar and The Public Enemy, 1931; The Petrified Forest, 1936; Angels With Dirty Faces, 1938; The Roaring Twenties, 1939; White Heat, 1949), these six films definitively capture Warners' domination of the mobster genre, and to varying degrees, they all qualify as classics.

With its stilted visuals and pulpy plot, Little Caesar remains stuck in the stiff, early-sound era, but it's still a prototypical powerhouse, with Edward G. Robinson's titular "Rico" setting the stage for all screen gangsters to follow. The Public Enemy made James Cagney a star (who can forget him smashing a grapefruit into Mae Clarke's face?), and Humphrey Bogart repeats his Broadway success in The Petrified Forest, a stagy adaptation of Robert Sherwood's play, still enjoyable for Bogey's ever-threatening malevolence. Then it's a Cagney triple-threat in Angels (with Pat O'Brien), racketeering in The Roaring Twenties (with Bogart), and especially the jailbird classic White Heat, with a fiery finale and an exit line ("Made it Ma! Top o' the world!") that epitomized Cagney's iconic, tough-guy image. In many ways Cagney was Warner Bros., and this Gangsters Collection pays enduring tribute to him and the important films that forged the studio's rugged reputation. --Jeff Shannon