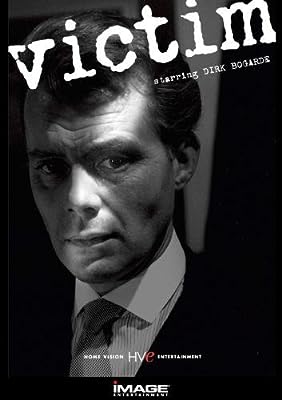 Price: $19.98
As of 2021-10-22 09:58:11 UTC (more info)
Product prices and availability are accurate as of 2021-10-22 09:58:11 UTC and are subject to change. Any price and availability information displayed on http://www.amazon.com/ at the time of purchase will apply to the purchase of this product.
Availability: Not Available - stock arriving soon
Buy Now from Amazon
Product Information (more info)
CERTAIN CONTENT THAT APPEARS ON THIS SITE COMES FROM AMAZON SERVICES LLC. THIS CONTENT IS PROVIDED 'AS IS' AND IS SUBJECT TO CHANGE OR REMOVAL AT ANY TIME.

In the early sixties, Basil Dearden's (The League of Gentlemen) VICTIM was perhaps the most daring film to appear on the British screen. A highly respected, but closeted barrister, Melville Farr, risks his marriage and reputation to take on an elusive blackmail ring terrorizing gay men with the threat of public exposure and police action. Starring Dirk Bogarde in a career-making role, VICTIM is widely regarded as the film that provoked the British parliament to begin amending its cruel and archaic laws against "homosexual acts."

Dirk Bogarde risked his career to make this 1962 film about a lawyer who risks his career to stand up to blackmailers. Part crime thriller and part plea for tolerance, Victim uses the terror of a blackmailing ring to point out the injustice of Britain's antisodomy laws. Bogarde plays Melville Farr, a married lawyer who learns of a blackmail scheme when one of its victims, an old friend, commits suicide rather than tell the police. As Farr conducts an investigation, he must confront his own past. Victim was ahead of its time--it was the first English-language movie to use the word "homosexual"--and as such it seems quaint and stilted at times. Straw-man clichés about homosexuality must be knocked down, and, like in all first-wave issue movies, occasionally characters need to have rather stilted debates. Still, the crime plot stands on its own, the performances are excellent, and the film is brave enough to make some very good points. This is an interesting and worthy bit of cinematic history. --Ali Davis

Vengeance Is Mine [Blu-ray]