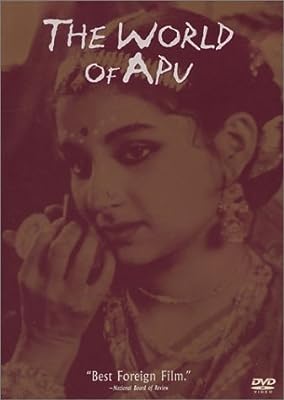 Price: $29.95
As of 2022-08-17 16:58:09 UTC (more info)
Product prices and availability are accurate as of 2022-08-17 16:58:09 UTC and are subject to change. Any price and availability information displayed on http://www.amazon.com/ at the time of purchase will apply to the purchase of this product.
Availability: Not Available - stock arriving soon
Buy Now from Amazon
Product Information (more info)
CERTAIN CONTENT THAT APPEARS ON THIS SITE COMES FROM AMAZON SERVICES LLC. THIS CONTENT IS PROVIDED 'AS IS' AND IS SUBJECT TO CHANGE OR REMOVAL AT ANY TIME.

Named the Best Foreign Film of 1960 by the National Board of Review and winner of numerous festivalprizes, THE WORLD OF APU is the crowning finish to Satyajit Ray's unforgettable Apu Trilogy. Forcedto abandon his education, Apu's prospects look bleak until fate intervenes in the form of an insanebridegroom. To save the abandoned bride from public disgrace, Apu marries her, beginning a new lifeas husband and father. Like the earlier films in the trilogy, Pather Panchali and Aparajito, THE WORLD OF APU is more than a mesmerizing look at Indian culture; it is a universal look at family love and personal sacrifice.