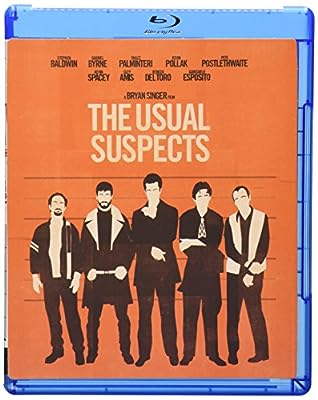 Price: $8.88
As of 2022-10-04 04:33:42 UTC (more info)
Product prices and availability are accurate as of 2022-10-04 04:33:42 UTC and are subject to change. Any price and availability information displayed on http://www.amazon.com/ at the time of purchase will apply to the purchase of this product.
Availability: Not Available - stock arriving soon
Buy Now from Amazon
Product Information (more info)
CERTAIN CONTENT THAT APPEARS ON THIS SITE COMES FROM AMAZON SERVICES LLC. THIS CONTENT IS PROVIDED 'AS IS' AND IS SUBJECT TO CHANGE OR REMOVAL AT ANY TIME.

The police collect assorted crooks as possibles in an attempted truck hijacking in New York.

Ever since this convoluted thriller dazzled audiences and critics in 1995 and won an Oscar for Christopher McQuarrie's twisting screenplay, The Usual Suspects has continued to divide movie lovers into opposite camps. While a lot of people take great pleasure from the movie's now-famous central mystery (namely, "Who is Keyser Söze?"), others aren't so easily impressed by a movie that's too enamored of its own cleverness to make much sense. After all, what are we to make of a final scene that renders the entire movie obsolete? Half the fun of The Usual Suspects is the debate it provokes and the sheer pleasure of watching its dynamic cast in action, led (or should we say, misled) by Oscar winner Kevin Spacey as the club-footed con man who recounts the saga of enigmatic Hungarian mobster Keyser Söze. Spacey's in a band of thieves that includes Gabriel Byrne, Stephen Baldwin, Kevin Pollak, and Benicio Del Toro, all gathered in a plot to steal a large shipment of cocaine. The story is told in flashback as a twisted plot being described by Spacey's character to an investigating detective (Chazz Palmintieri), and The Usual Suspects is enjoyable for the way it keeps the viewer guessing right up to its surprise ending. Whether that ending will enhance or extinguish the pleasure is up to each viewer to decide. Even if it ultimately makes little or no sense at all, this is a funny and fiendish thriller, guaranteed to entertain even its vocal detractors. --Jeff Shannon