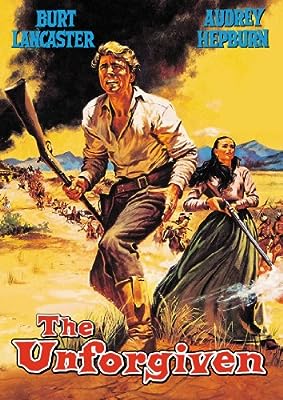 Price: $19.95
As of 2022-12-06 10:28:56 UTC (more info)
Product prices and availability are accurate as of 2022-12-06 10:28:56 UTC and are subject to change. Any price and availability information displayed on http://www.amazon.com/ at the time of purchase will apply to the purchase of this product.
Availability: Not Available - stock arriving soon
Buy Now from Amazon
Product Information (more info)
CERTAIN CONTENT THAT APPEARS ON THIS SITE COMES FROM AMAZON SERVICES LLC. THIS CONTENT IS PROVIDED 'AS IS' AND IS SUBJECT TO CHANGE OR REMOVAL AT ANY TIME.

Indian by birth, but secretly adopted by whites, Rachel Zachary (Audrey Hepburn) soon becomes the target of lawless racism and brutality when her true identity is revealed. The Indians want her back, the local whites want her dead, and her only hope for survival is a man (Burt Lancaster) who must face the most terrifying fight of his life-to save the woman he loves! Legendary director John Huston (The Misfits) is at the top of his form (Time) with this powerful, exciting (The Film Daily) tale of forbidden love set against America's most rugged and ruthless frontier. Co-starring Lillian Gish, Audie Murphy, John Saxon and Charles Bickford. Featuring a script by Ben Maddow (The Asphalt Jungle), The Unforgiven is a tough, Texas saga filled with pride, prejudice and passion (Video Movie Guide).