The Threepenny Opera (The Criterion Collection) 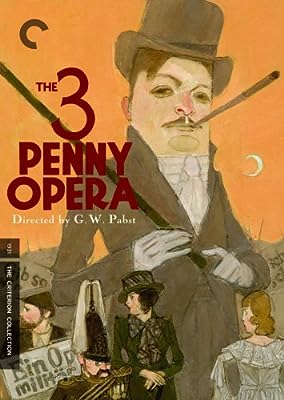 Price: $39.95
As of 2022-10-05 07:49:31 UTC (more info)
Product prices and availability are accurate as of 2022-10-05 07:49:31 UTC and are subject to change. Any price and availability information displayed on http://www.amazon.com/ at the time of purchase will apply to the purchase of this product.
Availability: Not Available - stock arriving soon
Buy Now from Amazon
Product Information (more info)
CERTAIN CONTENT THAT APPEARS ON THIS SITE COMES FROM AMAZON SERVICES LLC. THIS CONTENT IS PROVIDED 'AS IS' AND IS SUBJECT TO CHANGE OR REMOVAL AT ANY TIME.

The stage version of The Threepenny Opera caused a sensation in Berlin when it opened in 1928, and a movie version was quickly sold and shot. This 1931 film actually differs greatly from the stage production, yet it deserves its status as a classic of Weimar-era Germany (it was banned after the Nazis consolidated their power). Both were based on John Gay's famous The Beggar's Opera, but writer Bertolt Brecht and composer Kurt Weill added their own layers of genius. The story revolves around Mackie Messer (played by the fearsomely tough Rudolf Forster), also known as "Mack the Knife," a London bad boy whose underworld adventures expose all the hypocrisies and squalor of urban life. Those familiar with the stage score will note that the movie cuts a great deal of Weill's music, in favor of more social criticism; Brecht, high on socialist theory, had largely re-written the play when he turned in his screenplay for the movie. (He was then fired off the project, but many of his new ideas remained.)

Director G.W. Pabst (Pandora's Box) captures both the story's docklands setting and the unmistakable whiff of 1920s Berlin decadence, along with the bitter aftertaste of the original. The music remains stirring, and the indelible Lotte Lenya (Weill's wife and the enduring interpreter of his music) plays Jenny, the slattern Mackie thrusts aside to marry Polly (Carola Neher), daughter of the king of the beggars.

The sheer beauty of the film's black-and-white images is well served by Criterion's release, which also includes a second disc containing L'opera de quat'sous, a French-language version of the film, directed by Pabst simultaneously with the shooting of the German version. Its cast (including Albert Prejean and, in a small role, Antonin Artaud) and lighter tone make it a decidedly less compelling movie than the German take. A 48-minute documentary detailing the story of Threepenny's journey from stage to screen is an unusually good backgrounder; other features include a commentary track, a visual comparison of the German and French versions, and a delightful new introduction for the movie's re-release in East Germany two decades after its making, featuring actors Fritz Rasp and Ernst Busch. --Robert Horton

People on Sunday (The Criterion Collecti...