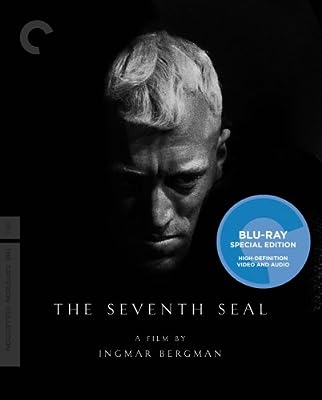 Price: $27.99
As of 2021-10-22 19:38:34 UTC (more info)
Product prices and availability are accurate as of 2021-10-22 19:38:34 UTC and are subject to change. Any price and availability information displayed on http://www.amazon.com/ at the time of purchase will apply to the purchase of this product.
Availability: Not Available - stock arriving soon
Buy Now from Amazon
Product Information (more info)
CERTAIN CONTENT THAT APPEARS ON THIS SITE COMES FROM AMAZON SERVICES LLC. THIS CONTENT IS PROVIDED 'AS IS' AND IS SUBJECT TO CHANGE OR REMOVAL AT ANY TIME.

Ingmar Bergman's The Seventh Seal's story is a simple one: A man seeks answers about life, death, and the existence of God as he plays chess against the Grim Reaper during the Black Plague. The boldness of The Seventh Seal's symbolism and brooding uncompromising subject matter was immediately apprehensible to people trained in literary culture who were just beginning to discover the ‘art’ of film, along with critics and readers of Cahiers du Cinema who were discovering Bergman for the first time. With the rise of the Auteur Theory The Seventh Seal suddenly became the quintessential art film of high school and college literature courses discovering Bergman's recurring themes such as 'The fear of death' and the 'absence of God' which were grim subjects the director would endlessly explore throughout his career, taking different shapes, and several different forms.

Few films have had as large a cultural impact as Ingmar Bergman's The Seventh Seal (Det sjunde inseglet). Disillusioned and exhausted after a decade of battling in the Crusades; a knight (Max von Sydow) encounters Death on a desolate beach and challenges him to a fateful game of chess. Much studied; imitated; even parodied; but never outdone; Bergman's stunning allegory of man's search for meaning was one of the benchmark foreign imports of America's 1950s art house heyday; pushing cinema's boundaries and ushering in a new era of moviegoing.

The bold directness is The Seventh's Seal's legendary strength, and one of the many reasons why it has remained treasured and adored throughout the years. This is a bleak uncompromising film which explores the simplicity of good and evil, along with the complexity of its tormenting hero, who struggles with such spiritual questions of faith and doubt; which clearly represents Bergman himself. Bergman was raised in a very strict Lutheran household where his father was a stern conservative parish minister with strict parenting rules. Growing up, Bergman would describe his home as a fortress of restriction and on several occasions Bergman was locked up in dark closets for infractions like wetting the bed. Throughout his early years Bergman became fascinated by the themes of death and the bleak side of humanity which brought upon his fascination with Adolf Hitler and the horrors of the holocaust. Even though he was raised in a devout Lutheran household, Bergman later stated that he lost his faith at age eight, and only came to terms with this fact while filming Winter Light. And so when filming The Seventh Seal he was still at the cross-roads with his spiritual identity while continuing to come to terms with his faith. Throughout The Seventh Seal Bergman purposely has characters asking questions but not be given the answers; because the director himself didn't know them.