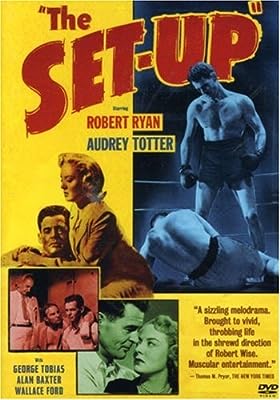 Price: $9.95
As of 2022-10-04 05:37:22 UTC (more info)
Product prices and availability are accurate as of 2022-10-04 05:37:22 UTC and are subject to change. Any price and availability information displayed on http://www.amazon.com/ at the time of purchase will apply to the purchase of this product.
Availability: Not Available - stock arriving soon
Buy Now from Amazon
Product Information (more info)
CERTAIN CONTENT THAT APPEARS ON THIS SITE COMES FROM AMAZON SERVICES LLC. THIS CONTENT IS PROVIDED 'AS IS' AND IS SUBJECT TO CHANGE OR REMOVAL AT ANY TIME.

Over-the-hill boxer Stoker Thompson thinks he can still win a bout despite doubts from his wife and his manager. He goes into his next fight determined to beat his opponent not realizing his manager has taken money from a tough gambler for having Stoker take a dive. Played out in real time.Format: DVD MOVIE Genre: DRAMA UPC: 053939674828

This riveting, gut-punching boxing picture plays out in something close to "real time." We are locked in with an over-the-hill pug (Robert Ryan) as he arrives at an arena for a match against a younger opponent. What he doesn't know yet is that his crooked manager has agreed to throw the fight for some gangsters--so Ryan has more than one battle on his hands as each bruising round goes by. At a lean, mean 72 minutes, The Set-Up manages to load the essential film noir themes into one potent package, excitingly delivered with no breathing room. Director Robert Wise would go on to make such mega-productions as The Sound of Music, which only makes you appreciate his economy here. And the movie's a fine showcase for tall, craggy Robert Ryan, one of the great under-sung actors in American movies, who was a boxer himself before becoming an actor. --Robert Horton

The Night of the Hunter [Blu-ray]