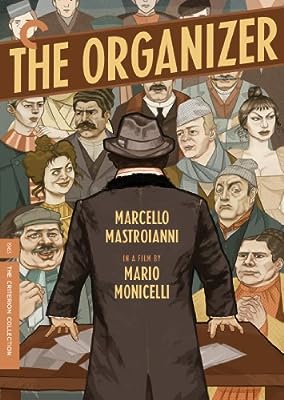 Price: $12.97
Availability: Not Available - stock arriving soon
Buy Now from Amazon
Product Information (more info)
CERTAIN CONTENT THAT APPEARS ON THIS SITE COMES FROM AMAZON SERVICES LLC. THIS CONTENT IS PROVIDED 'AS IS' AND IS SUBJECT TO CHANGE OR REMOVAL AT ANY TIME.

In turn-of-the-twentieth-century Turin, an accident in a textile factory incites workers to stage a walkout. But it s not until they receive unexpected aid from a traveling professor (8½'s Marcello Mastroianni) that they find a voice, unite, and stand up for themselves. This historical drama by Mario Monicello (Big Deal on Madonna Street) is a beautiful and moving ode to the power of the people, brimming with humor and honesty. The Organizer (I compagni) features engaging, naturalistic performances; cinematography by the great Giuseppe Rotunno (Amarcord); and a multilayered, Oscar-nominated screenplay, by Monicelli, Agenore Incrocci (The Good, the Bad, and the Ugly), and Furio Scarpelli (Il postino).