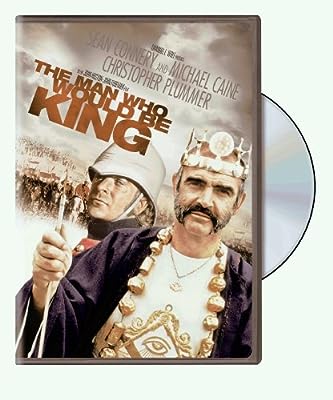 Price: $14.97
As of 2022-10-05 08:23:37 UTC (more info)
Product prices and availability are accurate as of 2022-10-05 08:23:37 UTC and are subject to change. Any price and availability information displayed on http://www.amazon.com/ at the time of purchase will apply to the purchase of this product.
Availability: Not Available - stock arriving soon
Buy Now from Amazon
Product Information (more info)
CERTAIN CONTENT THAT APPEARS ON THIS SITE COMES FROM AMAZON SERVICES LLC. THIS CONTENT IS PROVIDED 'AS IS' AND IS SUBJECT TO CHANGE OR REMOVAL AT ANY TIME.

Based on a Rudyard Kipling story and packed with spectacle, humor, excitement and bold twists of fate, John Huston’s film of "The Man Who Would Be King" earns its crown as “An epic like no other. One of the screen’s great adventure yarns.” (Danny Peary, Guide for the Film Fanatic). Sean Connery and Michael Caine – chins out, shoulders squared and with a sly wink – star as British sergeants Danny Dravot and Peachy Carnehan. The Empire was built by men like these two. Now they’re out to build their own empire, venturing into remote Kafiristan to become rich as kings.

Please Note: This is a Double Sided Disc. The first side would play and if there is a pause during half of the movie, please flip the disc over for the second side.