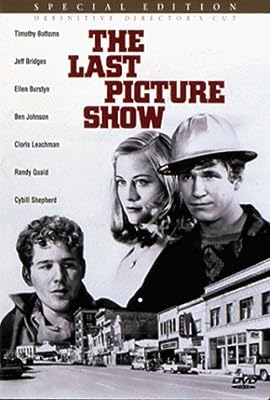 Price: $9.96
As of 2023-02-06 06:29:25 UTC (more info)
Product prices and availability are accurate as of 2023-02-06 06:29:25 UTC and are subject to change. Any price and availability information displayed on http://www.amazon.com/ at the time of purchase will apply to the purchase of this product.
Availability: Not Available - stock arriving soon
Buy Now from Amazon
Product Information (more info)
CERTAIN CONTENT THAT APPEARS ON THIS SITE COMES FROM AMAZON SERVICES LLC. THIS CONTENT IS PROVIDED 'AS IS' AND IS SUBJECT TO CHANGE OR REMOVAL AT ANY TIME.

Released in 1971 to critical acclaim and public controversy, THE LAST PICTURE SHOW garnered eight Academy Award(r) nominations (including Best Picture) and was hailed as the most important work by a young American director since Citizen Kane. A surprisingly frank, bittersweet drama of social and sexual mores in small-town Texas, the film features a talent-laden cast led by Jeff Bridges (The Mirror Has Two Faces), Cybill Shepherd (TV's "Cybill") and Timothy Bottoms (The Man in the Iron Mask). Cloris Leachman (TV's "The Mary Tyler Moore Show") and Ben Johnson (Rio Grande) each won Oscars(r) for their work in supporting roles. This modern classic is a must-have for every movie lover.