The Harder They Come (The Criterion Collection) 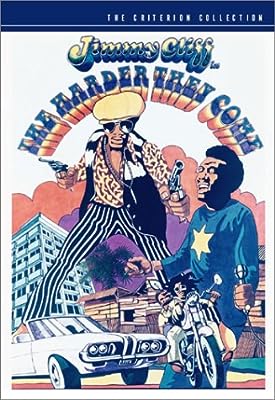 Price: $39.95
As of 2023-02-08 04:15:25 UTC (more info)
Product prices and availability are accurate as of 2023-02-08 04:15:25 UTC and are subject to change. Any price and availability information displayed on http://www.amazon.com/ at the time of purchase will apply to the purchase of this product.
Availability: Not Available - stock arriving soon
Buy Now from Amazon
Product Information (more info)
CERTAIN CONTENT THAT APPEARS ON THIS SITE COMES FROM AMAZON SERVICES LLC. THIS CONTENT IS PROVIDED 'AS IS' AND IS SUBJECT TO CHANGE OR REMOVAL AT ANY TIME.

Reggae superstar Jimmy Cliff is Ivan, a rural Jamaican musician who journeys to the city of Kingston in search of fame and fortune. Pushed to desperate circumstances by shady record producers and corrupt cops, he finally achieves notoriety- as a murderous outlaw. Boasting some of the greatest music ever produced in Jamaica, The Harder They Come brought the catchy and subversive rhythms of the rastas to the U.S. in the early '70s. Criterion is proud to present this underground classic in a new Director Approved special edition.

Director-producer Perry Henzel's all-Jamaican-made 1973 classic, one of the most beloved and longest-running of all international cult favorites, fiercely expresses the live-wire Jamaican spirit--an impoverished Africa tuned to American radio. The film also incorporates an archetypal passion for "outlaw" justice common to American Westerns, which were a staple of the Caribbean theater circuit at the time. Released just 12 years after Jamaica achieved independence, The Harder They Come also reflects the disenchantment that soon followed a massive post-independence exodus from the island's country hamlets to the tropical ghettos of Kingston, where a more grinding urban poverty awaited. Brilliantly shot, directed, written, and acted, especially by singer Jimmy Cliff in the leading role and Carl Bradshaw as his archenemy, the film tells an anthemic Jamaican story to seductive rhythms of a soundtrack that became a reggae bestseller. Ivan, a country boy who dreams of fame as a singer, rides into Kingston on a rickety country bus in the opening scenes, only to meet with disaster heaped on disaster, always at the hands of those masked as friends. In a breathless defining climax, Ivan finally breaks from his passivity and begins to wreak his revenge. Soon Kingston's music Mafia and the equally corrupt authorities are after him, but like the real-life people's hero (a man named Rhygin) on whom this character is partially based, Ivan leads them on a maddening chase--much to the delight of the people--eluding capture until the movie's shocking final moments. --Elena Oumano