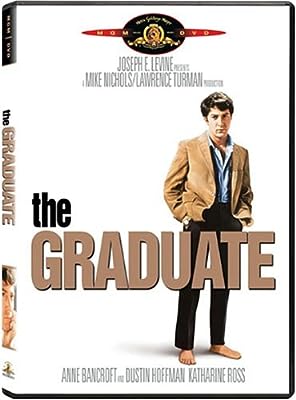 Price: $4.99
As of 2022-08-13 18:19:10 UTC (more info)
Product prices and availability are accurate as of 2022-08-13 18:19:10 UTC and are subject to change. Any price and availability information displayed on http://www.amazon.com/ at the time of purchase will apply to the purchase of this product.
Availability: Not Available - stock arriving soon
Buy Now from Amazon
Product Information (more info)
CERTAIN CONTENT THAT APPEARS ON THIS SITE COMES FROM AMAZON SERVICES LLC. THIS CONTENT IS PROVIDED 'AS IS' AND IS SUBJECT TO CHANGE OR REMOVAL AT ANY TIME.

Nominated* for seven Academy Awards® and winner for Best Director, this ground breaking and "wildly hilarious" (The Boston Globe) social satire launched the career of two-time Oscar®-winner** Dustin Hoffman and cemented the reputation of acclaimed director Mike Nichols. Pulsating with the rebellious spirit of the '60s and a haunting score sung by Simon and Garfunkel, The Graduate is truly a "landmark film" (Leonard Maltin). Shy Benjamin Braddock (Dustin Hoffman) returns home from college with an uncertain future. Then the wife of his father's business partner, the sexy Mrs. Robinson (Anne Bancroft), seduces him, and the affair only deepens his confusion. That is, until he meets the girl of his dreams (Katharine Ross). But there's one problem: she's Mrs. Robinson's daughter!