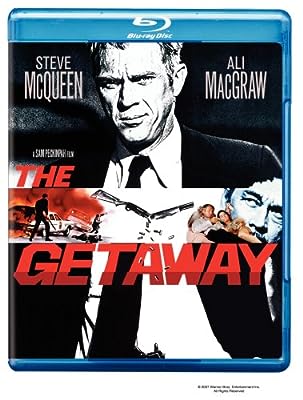 Price: $13.89
Availability: Not Available - stock arriving soon
Buy Now from Amazon
Product Information (more info)
CERTAIN CONTENT THAT APPEARS ON THIS SITE COMES FROM AMAZON SERVICES LLC. THIS CONTENT IS PROVIDED 'AS IS' AND IS SUBJECT TO CHANGE OR REMOVAL AT ANY TIME.

It's better than the 1994 remake starring Kim Basinger and husband Alec Baldwin, but this 1972 thriller relies too heavily on the low-key star power of Steve McQueen and Ali MacGraw, and the stylish violence of director Sam Peckinpah, reduced here to a mechanical echo of his former glory. McQueen plays a bank robber whose wife (MacGraw) makes a deal with a Texas politician to have her husband released from prison in return for a percentage from their next big heist. But when the plan goes sour, the couple must flee to Mexico as fast as they can, with a variety of gun-wielding thugs on their trail. MacGraw was duly skewered at the time for her dubious acting ability, but the film still has a raw, unglamorous quality that lends a timeless spin to the familiar crooks-on-the-lam scenario. As always, Peckinpah rises to the occasion with some audacious scenes of action and suspense, including a memorable chase on a train that still grabs the viewer's attention. Not a great film, but a must for McQueen and Peckinpah fans. --Jeff Shannon

The Godfather - The Coppola Restoration ...