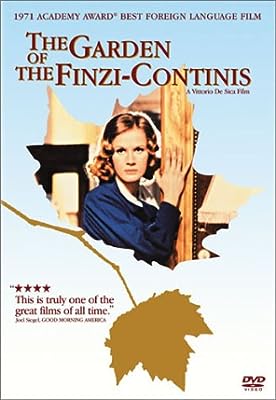 Price: $29.95
As of 2023-02-04 17:42:36 UTC (more info)
Product prices and availability are accurate as of 2023-02-04 17:42:36 UTC and are subject to change. Any price and availability information displayed on http://www.amazon.com/ at the time of purchase will apply to the purchase of this product.
Availability: Not Available - stock arriving soon
Buy Now from Amazon
Product Information (more info)
CERTAIN CONTENT THAT APPEARS ON THIS SITE COMES FROM AMAZON SERVICES LLC. THIS CONTENT IS PROVIDED 'AS IS' AND IS SUBJECT TO CHANGE OR REMOVAL AT ANY TIME.

Internationally acclaimed director Vittorio DeSica's Academy Award(r) -winning classic (Best Foreign Language Film, 1971) is gorgeously restored and remastered in Dolby Stereo. Amid the ravages of WWII, the Finzi-Continis, a cultured Jewish family, languish in aristocratic splendor on their Eden-likeestate in Ferrara, Italy. As the political atmosphere becomes increasingly hostile to its Jewish citizens, the handsome and carefree Finzi-Contini children, Micol (Dominique Sanda) and Alberto (Helmut Berger), turn their well-appointed home into a refuge for their young friends. In an atmosphere ofemotional instability, they play out a series of heartbreaking romantic rituals which spiral into tragedy as Fascism gradually descends upon their world. A simply breathtaking film about a way of life now lost forever.